Fly with the 162d Fighter Squadron in this handcrafted F-16 Fighting Falcon Model. Each piece is carved from wood and handpainted to provide a piece you’ll love.

With the formation and federal recognition of the Ohio ANG 121st Fighter Group at Lockbourne Field, near Columbus, the squadron was reassigned. The mission of the 162d Fighter Squadron was the air defense of Ohio. Parts were no problem and many of the maintenance personnel were World War II veterans so readiness was quite high and the planes were often much better maintained than their USAF counterparts. In some ways, the postwar Air National Guard was almost like a flying country club and a pilot could often show up at the field, check out an aircraft and go flying. However, the unit also had regular military exercises that kept up proficiency and in gunnery and bombing contests they would often score at least as well or better than active-duty USAF units, given the fact that most ANG pilots were World War II combat veterans. In 1950 the squadron exchanged its F-51Ds for F-51H Mustang very long range escort fighters that were suitable for long-range interception of unknown aircraft identified by Ground Control Interceptor radar stations.

With the surprise invasion of South Korea on 25 June 1950, and the regular military’s complete lack of readiness, most of the Air National Guard was federalized placed on active duty. However, the 162d was not federalized and remained at Cox-Dayton Municipal Airport and continued its air defense mission.

In September 1955 Air Defense Command wanted to re-equip the squadron from F-51Hs to jet-powered F-84E Thunderjets in accordance with the USAF directive to phase out propeller-driven fighter-interceptor aircraft from the inventory. However, because the runways at the Cox-Dayton Municipal Airport were too short at that time to support jet fighter operations, the National Guard Bureau approved the relocation request by the Ohio ANG to move the squadron to Springfield Municipal Airport, just east of Dayton.

With new facilities under construction at Springfield, the 162d Fighter-Interceptor Squadron conducted their transition training from temporary facilities at Wright-Patterson AFB. The F-84E Thunderjets were Korean War veteran aircraft and the squadron received training in the equipment from the Ohio ANG 164th and 166th Tactical Fighter Squadrons.

On 10 November 1958, the squadron was re-designated as the 162th Tactical Fighter Squadron and the squadron ended its attachment to Air Defense Command, returning to Tactical Air Command control. In 1959 and 1960 the squadron participated in exercises Dark Cloud and Pine Cone III, the latter taking place at Congaree AFB, South Carolina. In the exercises, the squadron practiced delivery of tactical nuclear weapons in the fictitious country of “North Saladia”.

During the 1961 Berlin Crisis, the 162th was federalized as part of the 121st Tactical Fighter Wing and Group for a period of twelve months beginning on 1 October. When activated, the 121st TFW consisted of three operational units, the 164th Tactical Fighter Squadron, based at Mansfield Lahm Regional Airport, Mansfield, Ohio; the 166th Tactical Fighter Squadron based at Lockbourne AFB, Ohio, and the 162d TFS at Springfield. However, due to funding shortages, only 26 F-84F’s of 166th TFS were deployed to Étain-Rouvres Air Base, France, although several ground support units from the 162d and 164th were also deployed. The squadron, however, remained under Federal USAF control until the crisis ended and it was returned to Ohio state control on 31 August 1962.

After the Berlin Federalization ended, 15 October 1962, the 162d was authorized to expand to a group level, and the 178th Tactical Fighter Group was established by the National Guard Bureau. The 162d TFS becoming the group’s flying squadron. Other squadrons assigned into the group were the 178th Headquarters, 178th Material Squadron (Maintenance), 178th Combat Support Squadron, and the 178th USAF Dispensary.

In 1967, the 162d TFS deployed to Hickam AFB, Hawaii for Tropic Lighting III, an exercise designed to assist in the training of Army ground units prior to their deployment to South Vietnam. This deployment required two over-water air refuelings in either direction.

1968 was the first time the 162d participated in a North Atlantic Treaty Organization (NATO) exercise. It deployed to Greece, participating in Operation Deep Furrow 68 at Larrossa Air Base. On this exercise fourteen F-84Fs were deployed, staging though Lajes Field, Azores and Torrejon Air Base, Spain. During Deep Furrow, they performed air-to-ground maneuvers with the United States Navy’s Sixth Fleet. Upon their return, the 162d TFS deployed eight aircraft to Alaska in November for Operation Punch Card IV. 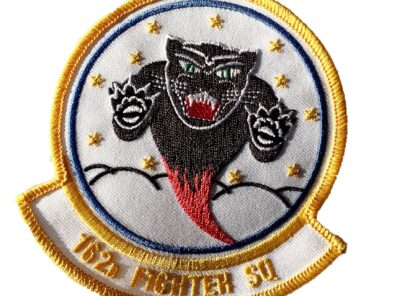