Fly with the 125th Fighter Squadron in this handcrafted F-16 Fighting Falcon Model. Each piece is carved from wood and handpainted to provide a piece you’ll love.

The squadron is a descendant organization of the 125th Aero Squadron, established on 30 July 1940. It was one of the 29 original National Guard Observation Squadrons of the United States Army National Guard formed before World War II.

History
The Oklahoma Air National Guard originated during the pre World War II formation of Army National Guard aviation units. In July 1940 the War Department allotted the 125th Observation Squadron to the Oklahoma National Guard. Organized in Tulsa, the squadron was equipped with 0-38 aircraft. It was federally recognized on 31 January 1941.

The 125th arrived in England in June 1944 and was assigned to the Ninth Air Force. Deployed to the U.S. Ninth Army, units of the 125th arrived in France in August 1944 and served with the Twelfth and Sixth army groups. In November 1944 the 125th was assigned to the XIX Tactical Air Command (Provisional) and then to the IX Fighter Command. After V-E Day the 125th was transferred to the XII Tactical Air Command of the Army of Occupation.

Oklahoma Air National Guard
The wartime 125th Liaison Squadron was re-designated as the 125th Fighter Squadron and allotted to the Oklahoma Air National Guard, on 24 May 1946. It was organized at Tulsa Municipal Airport, Oklahoma, and was extended federal recognition on 15 February 1947 by the National Guard Bureau. The 1125th Fighter Squadron was bestowed the history, honors, and colors of the 125th Liaison Squadron and all predecessor units. The squadron was equipped with F-51D Mustang Fighters and was assigned to the Missouri ANG 71st Fighter Wing, an umbrella unit of early ANG units in the midwest. The squadron was assigned the mission for air defense of the State of Oklahoma.

In June 1950, the 125th began re-equipping from F-51D Mustangs to F-84B Thunderjets. The F-84s were received from Republic after refurbishing, the aircraft seeing previous service with the 14th or 20th Fighter Groups.

Korean War federalization
The 125th and its parent 137th Fighter Group were federalized and ordered to active service on 10 October 1950 due to the Korean War, becoming part of Ninth Air Force, Tactical Air Command (TAC). On 27 November 1950, it was moved to Alexandria AFB, Louisiana, where it was joined with the Kansas ANG 127th Fighter Squadron and Georgia ANG 128th Fighter Squadron. The 137th Fighter-Bomber Wing was scheduled for deployment to the new Chaumont-Semoutiers AB, France, as part of the United States Air Forces in Europe (USAFE).

At Alexandria, the unit was scheduled for conversion training in the F-84G Thunderjet. Deployment of the wing was delayed, however, by the need to transfer its pilots to Korea from training and delays in receiving engines for the F-84Gs, as well as the ongoing construction at Chaumont AB. As no F-84Gs were available, F-84Ds were furnished by TAC and along with the F-84Bs, the unit trained in the jet aircraft.

Training and delays continued throughout 1951. Due to these delays, many of the activated National Guard airmen were released from active duty and never deployed to France. F-84G models were finally received in the spring of 1951 and the Guardsmen were able to train in long-range endurance missions. However, ongoing delays in France kept the 137th in Louisiana for over a year.

With mostly regular Air Force personnel and all the delays behind them, the remaining Guardsmen departed Louisiana on 5 May 1952 for Europe; however, the 128th inherited a base that was little more than acres of mud where wheat fields used to be. The only hardened facilities at Chaumont were a concrete runway and a handful of tarpaper shacks. The 127th wound up being stationed by USAFE at Neubiberg Air Base, West Germany until the facilities in France were suitable for military use. The aircraft arrived at Chaumont on 25 June, being the first USAF tactical air fighters to be based permanently in France, albeit working mostly in tents and temporary wooden buildings on their new base.

The Guardsmen of the 125th ended their active-duty tour in France and returned to the United States in late June, leaving their F-84G Thunderjets in Europe.

Air Defense mission
The 125th returned from France and was reformed in Tulsa in July 1952, being assigned to Tactical Air Command as a Fighter-Bomber squadron. It was re-equipped with F-51D Mustangs, owing to the lack of jet aircraft available. The squadron continued to train in the Mustang until 1954 when obsolescent F-80C Shooting Star jets were received.

In 1957 the Oklahoma Air National Guard was given a fighter-interceptor mission in Air Defense Command (ADC), and on 1 August, the 125th Fighter-Bomber Squadron was authorized to expand to a group level. The 138th Fighter-Interceptor Group was authorized and extended federal recognition by the National Guard Bureau. The 125th Fighter-Interceptor Squadron becoming the group’s flying unit. Other support squadrons assigned into the group were the 138th Headquarters, 138th Material Squadron (Maintenance), 138th Combat Support Squadron, and the 138th USAF Dispensary.

With the Fighter-Interceptor mission assignment, the 125th also assumed ADC runway alert program on full 24-hour basis – with armed jet fighters ready to “scramble” at a moment’s notice. This event brought the group into the daily combat operational program of the USAF, placing us on “the end of the runway” alongside regular USAF-Air Defense Fighter Squadrons. The obsolescent F-80 day fighters were upgraded to the all-weather/day/night F-86D Sabre Interceptor by the end of the year. In June 1959 the squadron traded their F-86Ds for the upgraded F-86L Sabre Interceptor with uprated afterburning engines and new electronics.

Air Transport mission
In January 1960, the 138th FIS was reassigned to Military Air Transport Service (MATS), trading in its Sabre interceptors for 4-engined C-97 Stratofreighter transports. With air transportation recognized as a critical wartime need, the unit was re-designated the 138th Air Transport Wing (Heavy) with the 125th Air Transport Squadron. During the 1961 Berlin Crisis, both the Group and squadron were federalized on 1 October 1961. From Tulsa, the 125th ATS augmented MATS airlift capability worldwide in support of the Air Force’s needs. It returned again to Oklahoma state control on 31 August 1962. Throughout the 1960s, the 125th flew long-distance transport missions in support of Air Force requirements, frequently sending aircraft to the Caribbean, Europe, Australia, Hawaii, Japan, the Philippines, and during the Vietnam War, to both South Vietnam, Okinawa and Thailand. The C-97s were retired in 1968 and the unit was transferred to Military Airlift Command (MAC), being re-equipped with C-124C Globemaster II heavy transports. The Group continued to fly long-distance intercontinental airlift flights until the Globemasters were retired at the end of 1972. 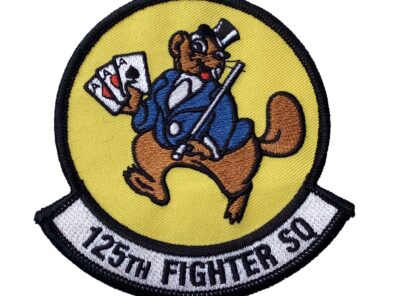