Solo with the 100th Flying Training Squadron in this hand crafted T-6 II model. Each piece is carved from wood to provide a piece you’ll love!

Due to the segregated status of the Army Air Forces in 1942 and the reluctance by the service to deploy African Americans into combat, the 332d remained in an extended training status. The Group was transferred to Selfridge Army Air Base, near Detroit, Michigan in March 1943 after the decision was reached to deploy the unit. Racial tensions in the Detroit area, however, forces a move to Oscoda Army Airfield, in isolated northeast Michigan the next month where the final training of the unit was performed by First Air Force. However, the unit was delayed again going into combat, and also was sent back to Selfridge upon completion of training at Oscoda AAF to perform Air Defense flights over the Detroit area beginning in July 1943.
For six months, the unit remained at Selfridge until pressure on the Army led to the decision to deploy the 100th to the Fifteenth Air Force in Italy at the end of 1943, under the command of Robert B. Tresville, to support the strategic aerial bombardment campaign being carried out by Boeing B-17 Flying Fortress and Consolidated B-24 Liberator Heavy bombers from newly established air bases in the Foggia, Italy area.

As the Italian Campaign pushed further north into Italy during 1944, the squadron moved to operate from forward captured air bases, flying bomber escort missions initially with Republic P-47D Thunderbolts, then being upgraded to the long-range North American P-51D Mustang fighter. In combat, the unit engaged enemy forces in the Rome-Arno area, then during the D-Day landings in France, took part in the Normandy and Northern France campaigns. It returned to the MTO in August 1944, flying combat missions supporting the Invasion of southern France and attacking enemy targets in Northern Italy, Po Valley, the German Rhineland and the Western Allied invasion of Germany during March and April 1945.
With the end of the War in Europe in May 1945, the squadron was returned to Southern Italy, being stationed at Lucera Airfield, near Foggia where the unit slowly was demobilized and personnel returned to the United States. The 100th Fighter Squadron was inactivated as an administrative unit at Camp Kilmer, New Jersey in mid-October 1945.

The 332d was re-activated as part of Tactical Air Command Ninth Air Force at Lockbourne Army Airbase (Later Lockbourne AFB), near Columbus, Ohio in July 1947, again as a segregated African-American unit of the Army Air Forces (later United States Air Force). At Lockbourne, the Wing was equipped with new F-47N Thunderbolts that were designed for very-long range flights in the Pacific Theater to attack ground targets in the Japanese Home Islands. However, the aircraft were never deployed due to the sudden end of the War in August 1945.At Lockbourne, the squadron participated in firepower demonstrations, gunnery training, and operational missions to maintain combat proficiency. The African-American segregated unit was inactivated in July 1949 as a result of President Harry S. Truman’s Executive Order 9981. EO 9981 abolished racial discrimination in the United States Armed Forces. The 100th’s personnel and equipment were reassigned to other units.

The 100th was reactivated by Strategic Air Command in 1953 as an integrated squadron,[dubious – discuss] being equipped with Boeing KB-29P Superfortress tankers and given an air refueling mission, based at Robins AFB, near Macon, Georgia. The squadron primarily performed areal refueling of SAC’s Boeing B-50 Superfortress medium bombers (the Convair B-36 Peacemaker did not have IFR capability) using a primitive “looped hose” refueling system. In 1954, the squadron moved to Pease AFB, New Hampshire; received Boeing KC-97 Stratotankers and performed aerial refueling with SAC’s Boeing B-47 Stratojet units, deploying frequently to England and Morocco in North Africa to operate from what were called “REFLEX” bases to refuel SAC bombers prior to their planned flights into Communist-controlled Eastern Europe and the Soviet Union. The 100th Air Refueling Squadron continued to operate from Pease until the end of the B-47 and REFLEX era in 1966, at which point the unit was inactivated.
Air Training Command re-activated the 100th as a Flying Training Squadron at Williams AFB, Phoenix, Arizona in September 1989 to demonstrate the feasibility of Air Training Command’s plan for five flying training squadrons at each pilot training base. It’s instructor pilots provided incoming pilots qualification in T-37 and T-38 aircraft, and as instructor pilots. The squadron was inactivated as part of the post-Cold War draw-down of the Air Force in 1993.
Post-Cold War era 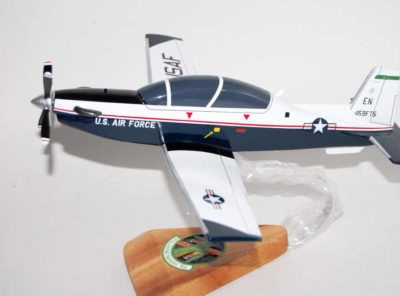 459th Flying Training Squadron Twin Dragons T-6 II Solo again in the T-6 II with Twin Dragons 459 FTS. This 12 inch model is a must have for any Air Force Aviator and makes the perfect gift after soloing! World … Read More 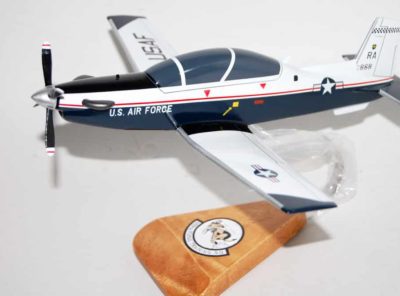 559th Flying Training Squadron Billy Goats T-6 II Solo again in the T-6 II with Billy Goats 559th FTS. This 12 inch model is a must have for any Air Force Aviator and makes the perfect gift after soloing! World … Read More 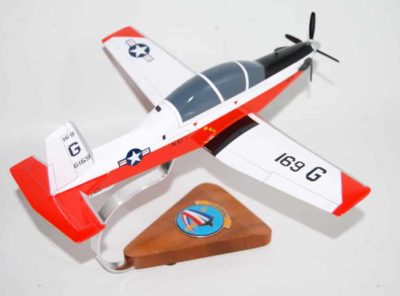 VT-27 Boomers (Navy) T-6b Model 12 inch wooden model of the T-6b – a first for many a Naval Aviator of the World Famous VT-27 Boomers!.  Let the T-6 start your model collection off right! Training Squadron TWENTY-SEVEN was initially … Read More 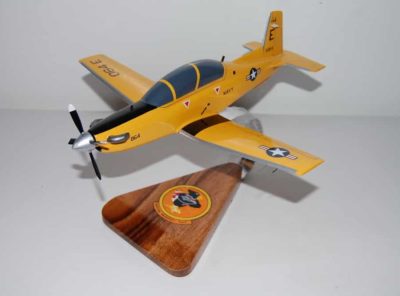 VT-2 Doerbirds T-6b CONA Model A 12 inch T-6b model  of the VT-2 Doerbirds- a first for many a Naval Aviator.  This model is a must have for any Naval Aviator and makes the perfect gift after soloing! Training Squadron … Read More 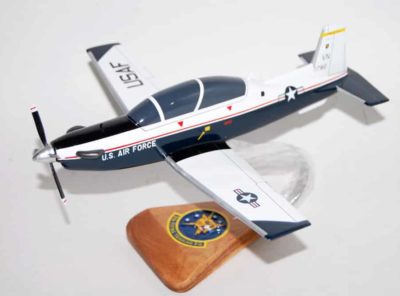 5th Flying Training Squadron Spittin Kittens T-6 II Solo again in the T-6 II with Spittin Kittens FTS. This 12 inch model is a must have for any Air Force Aviator and makes the perfect gift after soloing! World War … Read More 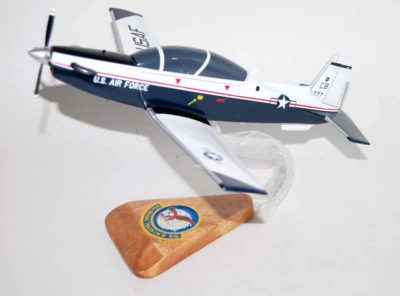 41st Flying Training Squadron Flying Buzzsaws T-6 II Solo again in the T-6 II with Flying Buzzsaws FTS. This 12 inch model is a must have for any Air Force Aviator and makes the perfect gift after soloing! The 41st … Read More 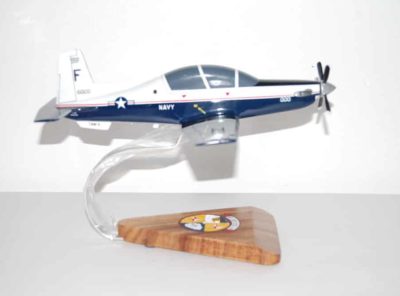