The   Lockheed L-049 Constellation was a line of aircraft that began with the L-049 model. The L-049 was used as a military transport aircraft, called the C-69, by the United States Army Air Forces during World War II. After the war, it was also produced as a civilian aircraft. The L-049 was eventually replaced by the updated L-649 and L-749 Constellation models in 1946.

In 1939, Howard Hughes, the owner of Trans World Airlines (TWA), held a meeting with executives from the Lockheed Aircraft Corporation, including designer Clarence “Kelly” Johnson, to discuss his vision for the “airliner of the future.” The L-044 Excalibur, an airliner being developed by Lockheed, did not meet Hughes’ expectations, so the team decided to start from scratch and create a new design.

They lengthened the Excalibur, increased its wingspan, and redesigned the cockpit. The resulting design, known as the L-049 or Excalibur A, was powered by Wright R-3350 Duplex-Cyclone radials, with Pratt & Whitney R-2800 as a backup option, and had wings similar to those on the P-38 Lightning fighter. Hughes’ company, the Hughes Tool Company, funded the construction of the 40 Excaliburs that he ordered, at a cost of $450,000 each. The development of the Excalibur was kept secret until the 35th aircraft was delivered to TWA in order to prevent competitors from ordering the aircraft.

Made from Mahogany/ 18 inches 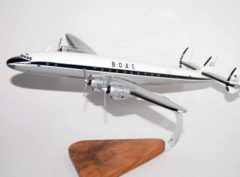