Fly off the USS Rangers in a carefully crafted S-3a Viking model with the VS-38 Red Griffins – a perfect display to capture your time with the legendary squadron!  Each model is solid wood and hand painted to provide a piece of exceptional quality.   Wingspan is 18 inches.

Two of the US Navy’s West Coast S-3B squadrons, VS-29 and VS-38, were disestablished in ceremonies at NAS North Island, California, on 17 April 2004. The Navy’s S-3B Sundown Plan calls for the gradual disestablishment of Viking squadrons as the number of operational carrier-based squadrons flying the F/A-18E/F increases. The F/A-18 will take over the aerial tanking role from the S-3.

The Fighting Red Griffins of Sea Control Squadron Thirty- Eight have provided significant contributions to the Navy team for over forty-six years. Throughout three wars (Korea, Vietnam, and Operation Desert Storm) the squadron has executed their operational tasking to perfection becoming the warfare and tactical leaders of the VS community.

The Red Griffins were commissioned as a Torpedo Bomber Unit in August 1950. The men were among the very first Naval Reservist called into active duty during the Korean War Mobilization. Originally activated as VC-892 at NAS Seattle, the squadron was made up entirely of Seattle residents. Initially, the command flew the TBM “Avenger” from the Carriers USS SICILY (CVE-118), USS RENDOVA (CVE-114), USS BAEDONG STRAIT (CVE-11), and USS POINT CRUZ (CVE-119).

Two years after commissioning, the Red Griffins moved to NAS North Island to lead their community into carrier based ASW. The following year, they were designated the Navy’s first carrier based anti-submarine warfare squadron. A year later (in 1954) the Red Griffins were the first to transition to a twin engines-2F “Tracker”. During this period the command participated in its second war, making several deployments to the waters of South Vietnam on the carriers USS BENNINGTON (CVS-20) and USS HORNET (CVS-12) while supporting Operation Market Time.

The Fighting Red Griffins were the first ASW squadron to move to large deck carriers. In 1973, the Red Griffins transitioned to the S-3A “Viking”. During the next fifteen years, the Red Griffins made deployments to the Western and Northern Pacific, the Indian Ocean and Central and South America aboard USS RANGER (CV-61), USS KITTYHAWK (CV-63), USS CONSTELLATION (CV-64) and USS ENTERPRISE (CVN-65) with Air Wings TWO, ELEVEN, and FOURTEEN.

In December of 1990, the “Fighting Red Griffins” deployed for their fourth consecutive time with CVW-2 on WESTPAC ’91 participating in Operation Desert Shield and Desert Storm. During this deployment, the Red Griffins became the first VS squadron to participate in combat strike operations. The Red Griffins deployed again in 1992 to enforce the no-fly zone in Iraq. Additional tasking included participation in the United Nations relief effort RESTORE HOPE assisting in humanitarian efforts in Somalia.

During 1993, the Red Griffins brought the USS CONSTELLATION (CV-64) to San Diego from SLEP in Philadelphia and finishing the year with newly upgraded S-3B airframes and a new official name: Sea Control Squadron 38.

The Red Griffins deployed again on USS CONSTELLATION (CV-64) in 1994 for WESTPAC ’95 and Operation Southern Watch. Upon their return, they the Red Griffins continued to maintain OPTEMPO with multiple detachments to Comox CFB, Vancouver, B. C., Seattle, Washington and Victoria, B.C.

In 1997, the Red Griffins deployed again on the USS CONSTELLATION with CVW-2 to patrol the no fly zone in Iraq as part of Operation Southern Watch during WESTPAC ’97. The Griffins returned from cruise and began to prepare for a detachment to Fagosta, Chili flying coordinated ops with the Chilean Air Force.

In May 1999 the Griffins deployed the USS CONSTELLATION on WESTPAC 99 once again to participate in Operation Southern Watch. The cruise saw many milestones for the Red Griffins and CVW-2. WESTPAC-99 was the first cruise for VS-38 without USW as a part of their mission. The Red Griffins adapted to the change by improving all other missions of the S-3B. While flying several SSC, ASR, and ES mission flights, the Griffins set a record for fuel passed during cruise by giving away over 3 million pounds of fuel assisting strike operations over Southern Iraq. The Griffins were also integral to CVW-2’s accumulating 10,000 traps during deployment with every member of the squadron attaining centurion status.

In 2000 the Griffins participated in COPE THUNDER in Anchorage Alaska. The detachment allowed the Red Griffins to fly low levels and drop bombs on Ranges while polishing ES skills against simulated SAM sites along routes.

In May 2000 VS-38 was recognized for thirteen years of mishap free flying when they won the CNO Safety Award for the fifth time in 9 years. The squadron was also recognized for outstanding performance during WESTPAC ’99 by winning the Captain Arnold Jay Isbell Award for ASW excellence for the fourth time. 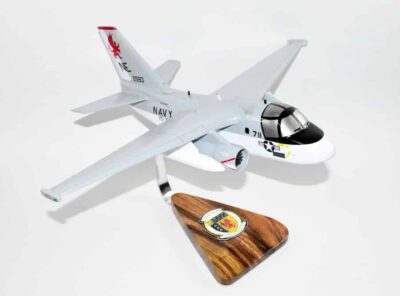 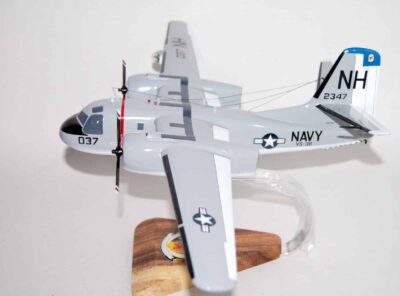 VS-38 Red Griffins S-2 Model Fly with the Red Griffins in this handcrafted S-2 model – a perfect display to capture your time with the legendary squadron!  Each model is solid wood and hand painted to provide a piece of … Read More 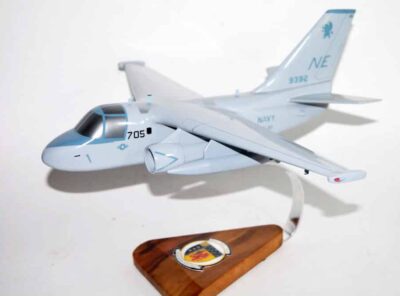 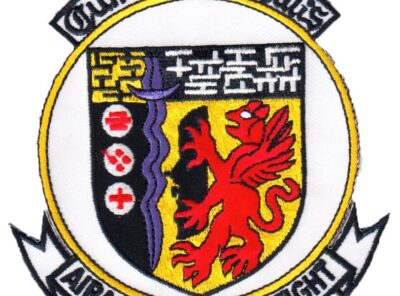 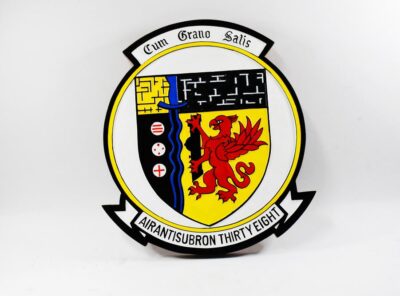 Show your aviation lineage with the legendary VS-38 Red Griffins on a 14 inch solid wood plaque.  Each piece is carefully carved and hand painted to provide a colorful piece of craftsmenship you’ll love! 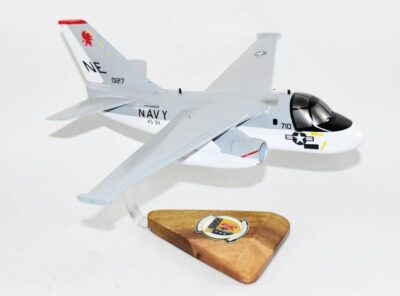 A carefully crafted S-3a Viking model with the VS-38 Red Griffins – a perfect display to capture your time with the legendary squadron!  Each model is solid wood and hand painted to provide a piece of exceptional quality.