Marine Fighter Attack Squadron 142 (VMFA-142) was an aviation unit of the United States Marine Corps Reserve that was active from 1942 to 2008. At the time of its inactivation, the squadron was based at Naval Air Station Atlanta, Georgia and fell under the command of Marine Aircraft Group 42 (MAG-42), 4th Marine Aircraft Wing (4th MAW). Due to a re-organization within Marine aviation, the squadron moved to Naval Air Station Fort Worth Joint Reserve Base, Texas and was placed in a cadre status under Marine Aircraft Group 41.

During World War II, VMFA-142 participated in the following Campaigns:

The squadron converted from the A-4M Skyhawk II to the F/A-18A Hornet and was formally redesignated on 21 December 1990 as Marine Fighter Attack Squadron 142 (VMFA-142).

In August 1997, due to the pending BRAC 93-mandated closure of NAS Cecil Field by the end of 1999, the squadron relocated to Naval Air Station Atlanta, approximately 25 miles (40 km) North of Atlanta in Marietta, Georgia. It was the second F/A-18 squadron to be transferred to NAS Atlanta, having been preceded by the Naval Air Reserve’s Strike Fighter Squadron TWO ZERO THREE (VFA-203), which was also previously based at NAS Cecil Field.

In May 2000, in a first for CVWR-20, five Marine Hornets from VMFA-142 joined the wing for carrier qualification, qualifying all five pilots. Three of the Hornets then flew to Naval Station Roosevelt Roads, Puerto Rico for additional Fleet training operations.

Global War on Terror
In February 2005, VMFA-142 became the first fixed wing Marine reserve fighter unit activated to combat since the Korean War. They deployed in support of Operation Iraqi Freedom and served at Al Asad Air Base, providing combat support in the Al Anbar province of Iraq until September 2005.

In accordance with a Base Realignment and Closure (BRAC) Commission decision directing the closure of Naval Air Station Atlanta and its transfer to the Air Force Reserve Command as part of Dobbins Air Reserve Base, VMFA-142 was placed in cadre status in July 2008. Plans from 2010 to transition the squadron to the F-35B Lightning II Joint Strike Fighter by 2019 have since been scrapped, and the squadron no longer appears in the transition plan Marine Corps Aviation Plan 2017.

Be the first to review “VMSB-142 Squadron Patch – Sew On” 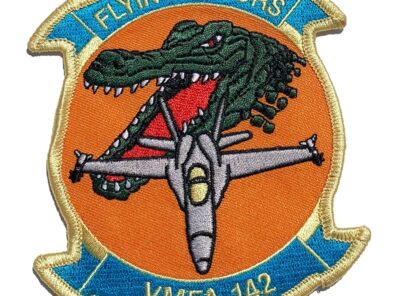 VMFA-142 Flying Gators Patch – Plastic Backing Marine Fighter Attack Squadron 142 (VMFA-142) was an aviation unit of the United States Marine Corps Reserve that was active from 1942 to 2008. At the time of its inactivation, the squadron was … Read More 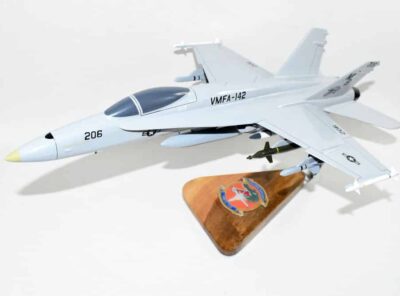