Early years
Marine Helicopter Transport Squadron 261 (HMR-261) was activated on April 5, 1951 at Marine Corps Air Station Cherry Point, North Carolina. From 1951 through 1956, HMR-261 carried the tail code of “HM.” Since then, it has carried the tail code of “EM” on its helicopters.
In 1954, the squadron moved from MCAS Cherry Point to its current home, MCAS New River, North Carolina. In October 1954, HMR-261 embarked its HRS helicopters on the USS Saipan (CVL-48) and sailed for Haiti where they flew humanitarian assistance/disaster relief missions following Hurricane Hazel. In 1956, the squadron was redesignated Marine Helicopter Transport Squadron (Light) 261 (HMR(L)-261) to reflect the acquisition of the H-34 Choctaw to replace its HRS-1 helicopters. The squadron was the first helicopter squadron to conduct troop lifts on the East coast. In 1961, the squadron was redesignated Marine Medium Helicopter Squadron 261 (HMM-261). The squadron was, by then, flying the UH-34D helicopter. During 1962, HMM-261 was embarked aboard the USS Boxer (CV-21) and subsequently the USS Thetis Bay (CVE-90) for support during the Cuban Blockade. Returning to MCAF New River, HMM 261 was deployed in the south in support of the civil rights freedom marches in the spring of 1963. Returning to MAG-26, MCAF New River, HMM-261 prepared to stand down for subsequent transfer of its colors to the Western Pacific.
Vietnam War[edit]

“Elvis 01” a CH-46E of HMM-261 awaits the loading of Army Rangers on Grenada during Operation Urgent Fury, Oct. 1983.
In 1982, the Raging Bulls deployed to Beirut, Lebanon. In October 1983, the squadron had just departed Naval Base Norfolk aboard USS GUAM heading toward Beirut, but received word to divert to the Caribbean for the invasion of Grenada, codenamed Operation Urgent Fury. There, the squadron provided the only helicopters for the initial landings of Marines and subsequent operations for the entire JTF until Army helicopters arrived on the third day of action. (Delta Force had arrived by Army helicopters as part of the initial assault, but after day one all the Army helicopters were unavailable due combat damage. While providing Close Air Support to Army forces, two AH-1T (Cobra] were shot down resulting in three squadron pilots being killed. Later one CH-46 was damaged beyond repair during the successful rescue of several hundred American students at the Medical School’s Grand Anse Campus, while inserting Rangers of 2nd BN, 75th Ranger Regt. Following this operation, HMM-261 resumed its mission to continue to war-ravaged Beirut, to relieve 24th MAU which had endured the bombing of the Marine barracks. While stationed off Beirut, the squadron conducted a variety of missions in support of the 22D Marine Amphibious Unit located ashore, US 6th Fleet and the Department of State (flying diplomats to/from the various meetings and evacuating over 800 American and Lebanese citizens to safety.)
The Gulf War and the 1990s[edit] In 1990, the squadron took part in Operation Sharp Edge, which consisted of the evacuation and protection of American citizens in Liberia. In January 1991, following a quick turnaround in New River, the squadron deployed to Saudi Arabia for Operation Desert Shield and Operation Desert Storm. With the ground war in full swing, the Raging Bulls flew numerous medevac and assault support missions in support of 2nd Marine Division. The squadron returned home to New River on May 13, 1991.
April 15, 1997 saw HMM-261 prepared for a pending Noncombatant Evacuation Operation (NEO) in the country of Zaire, leaving behind a detachment of (4) CH-46’s and (2) UH-1N’s to board the USS Ponce. The 22nd Marine Expeditionary Unit (MEU) Forward, which included HMM-261 (REIN) Det. A departed on time and entered the Mediterranean Sea to cover the 22nd MEU’s commitments. During the deployment, the main body of the 22nd MEU participated in two major operations: Operation Guardian Retrieval, operating out of Brazzaville, Congo; and Operation Noble Obelisk, in Freetown, Sierra Leone, which resulted in the evacuation of more than 2,500 American citizens and foreign nationals. Meanwhile, HMM-261 (REIN)’s Det. A participated in Operation Silver Wake in Tirana, Albania. A year later, in October 1998, HMM-261 was called upon to help provide hurricane relief in Puerto Rico.
Global War on Terror[edit] In July 2002, the MEU was called upon to conduct operations in support of Operation Enduring Freedom (OEF). Once off the coast of Pakistan, the MEU continued to plan for interdiction operations in Afghanistan. Concurrently AV-8’s flew the MEU’s first reconnaissance flights over the country. Advanced parties were dispatched into Pakistan to conduct liaison with host nation agencies.
2003 brought about pre-deployment planning for Operation Iraqi Freedom II. Upon arriving in the Persian Gulf, HMM 261 flew into 1st Marine Expeditionary Force’s Area of Operation, where it was attached to the 3rd Marine Aircraft Wing at Al Asad Airbase. This was the first such integration of this scale in Marine Corps History, and the Raging Bulls were integral to its success.
While in Iraq, HMM-261 was fully engaged in various operations in support of Operation Iraqi Freedom II. The squadron continued to perform direct support missions in the form of Casualty Evacuation (CASEVAC), Command and Control (C&C) standby, general support, re-supply, troop movements, VIP lifts and Tactical Recovery of Aircraft and Personnel (TRAP)/Quick Reaction Force (QRF) during the day and night. In September 2004, HMM-261 returned to MCAS New River, where it was attached to Marine Aircraft Group 29. During the deployment, HMM-261 successfully completed over 2,000 Aviation Support Requests (ASRs), transported 8,358 passengers and 815,274 lb of cargo, flew 3,058.2 hours and executed 1,941 sorties, with zero combat casualties or loss of any aircraft.
On November 8, 2005, HMM-261 (REIN) conducted their onload to the USS Nassau to begin their current deployment as part of the 22nd Marine Expeditionary Unit. They were based at Al Asad air base in western Iraq and on their third tour in support of Operation Iraqi Freedom. The squadron finished its latest tour in Iraq in late March 2006, accomplishing 1,845 sorties and over 3,000 combat flight hours providing medevacs and close air support. 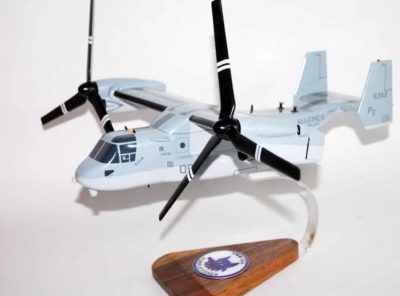 VMM-364 Purple Foxes MV-22 Model Fly with the Purple Foxes of VMM-364 in this hand crafted MV-22 model. Each model is carved from wood and hand painted to provide a unique piece that will always be treasured. 16 inches Early … Read More 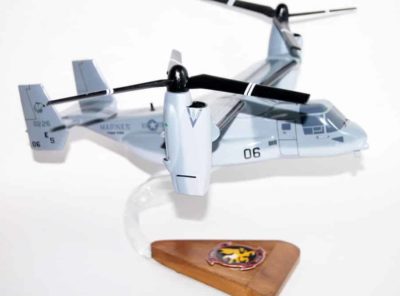 VMM-266 Fighting Griffins MV-22 Model Fly with the Fighting Griffins of VMM-266 in this hand crafted MV-22. Each model is carved from wood and hand painted to provide a unique piece that will always be treasured. Marine Medium Tiltrotor Squadron … Read More 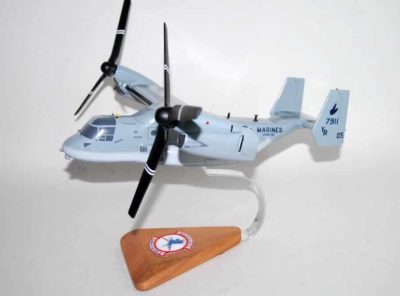 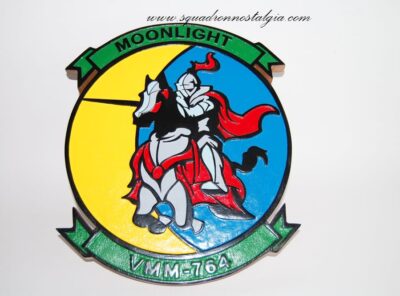 VMM-764 Moonlighters Plaque Fly with the Moonlighters of VMM-764 in this 14-inch handcrafted plaque. Each piece is carved from wood and hand painted to provide a piece you’ll love. Activated April 15, 1958 as Marine Helicopter Transport Squadron 764, Organized … Read More 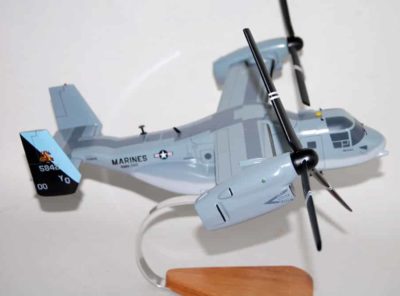 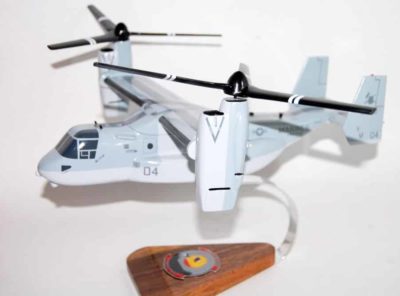 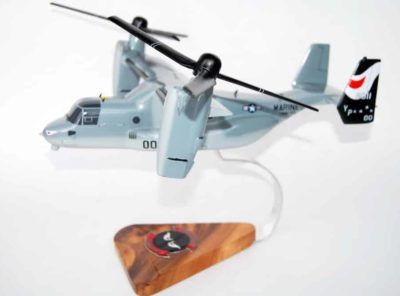 VMM-163 Evil Eyes MV-22 Model Fly with the Evil Eyes of VMM-163 in this handcrafted MV-22. Each model is carved from wood and hand-painted to provide a unique piece that will always be treasured. HMR(L)-163, the predecessor to HMM-163, was … Read More