Marine Fighter Attack Squadron 334 (VMFA-334) was a United States Marine Corps fighter squadron. Known as the “Falcons”, they were part of Marine Aircraft Group 15 and Marine Aircraft Group 33. They participated in action during World War II and the Vietnam War and were decommissioned in 1971.

Marine Scout Bomber Squadron 334 (VMSB-334) was activated on August 1, 1943 at Marine Corps Air Station Cherry Point flying the Douglas SBD Dauntless. The squadron traveled around the United States for a year training until they were deactivated on October 10, 1944, a day that many other scout bomber squadrons were deactivated.

Post World War II years
Marine Attack Squadron 334 (VMA-334) was reactivated on May 31, 1952 at Marine Corps Air Station Miami as part of the general increase in the United States military brought on by the Korean War. At this time they were equipped with the F6F Hellcat, later with the F4U Corsair, then the F9F Panther. Less than two years later, on January 23, 1954, the squadron transitioned to the FJ Fury and was redesignated Marine Fighter Squadron 334 {VMF-334}.

VMF-334’s first overseas deployment came in early 1957 when they were sent to Naval Air Station Atsugi for more than a year. They returned to Marine Corps Air Station El Toro in January 1958 where they became the first West Coast squadron to transition to the F8U-1 Crusader.

Vietnam War
The Falcons were redesignated Marine Fighter Attack Squadron 334 (VMFA-334) on August 1, 1967 and again transitioned airframes to the F4-J Phantom II. The Falcons departed MCAS El Toro on August 20, 1968. The squadron arrived at Da Nang Air Base on September 1. Initial combat operations began immediately. VMFA-334 relocated to Chu Lai early in 1969. VMFA-334 remained in Vietnam until September 1969 when they were relocated to Marine Corps Air Station Iwakuni, Japan. From there they flew air support over the US Navy intelligence ship the USS Pueblo, which had been attacked and captured by North Korea. 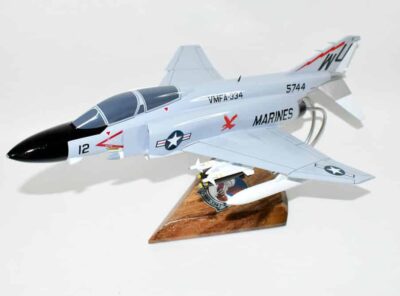