A 4″ With Hook and Loop Squadron Patch of the VMFA-122 Flying Leathernecks.

For its second tour, VMF-122’s flight echelon embarked upon the escort carrier USS Hollandia in July 1944 while the ground echelon steamed out on the USS Tryon. Beginning in October 1944 both echelons would be reunited when they were reunited and began operating from an airstrip on Peleliu. At times they provided close air support for Marines during the Battle of Peleliu at distances of just over 1000 yards from where they took off. The squadrons ability to provide napalm and rockets, both new weapons systems, greatly aided in the destruction of the last Japanese strongholds on the island.[2] For the remainder of the war they remained on the island conducting combat operations until August 1945.
Following the surrender of Japan, VMF-122 returned home to Marine Corps Auxiliary Air Station Oak Grove, North Carolina in January 1946. They remained there for less than two years before being moved to MCAS Beaufort which was followed by another move to Marine Corps Air Station Cherry Point, North Carolina.
1950s
The squadron was reactivated in November 1947, flying the FH Phantom, becoming the first Marine squadron to employ jet-propelled aircraft. During this time, the squadron also fielded the first and only Marine aerial demonstration team known as the “Flying Leathernecks”. They toured the country for two years before being disbanded with the transition to the F2H Banshee. In April 1951, the squadron became the first Marine jet squadron to be both day and night qualified for carrier operations. On 15 May 1951, the squadron deployed from Naval Air Station Quonset Point aboard the USS Oriskany to the Mediterranean Sea, returning to the Marine Corps Air Station, Cherry Point in early October 1951. In 1952, they again transitioned to the F9F Panther and after a Mediterranean cruise in 1953, they were assigned to Marine Aircraft Group 24 at MCAS Cherry Point.
January 1954 again saw the squadron transitioning aircraft, this time to the FJ Fury. The next few years saw a litany of small deployments on board a multitude of aircraft carriers. The squadron relocated to Marine Corps Air Station Beaufort in September 1957 and in December of that year they became the first squadron in the Marine Corps to fly the F-8 Crusader. It was at this time that they transitioned from being the “Candystripers” to the new nickname of “Crusaders.” The squadron became VMF(AW)-122 upon receiving all weather capable F-8Es in 1962. That year they also deployed to Key West, Florida to fly combat air patrol during the Cuban missile crisis.
Vietnam War

VMFA-122 F-4S at MCAS Cherry Point, 1 June 1985.
Following their time in Vietnam, the Crusaders were assigned to MCAS Kaneohe Bay, Hawaii in September 1970. They were then ordered to MCAS Iwakuni, Japan as a Joint Chiefs of Staff directive to counter a North Vietnamese offensive against South Vietnam. The squadron returned to Kaneohe Bay, Hawaii on 27 December 1972. On August 14, 1974, VMFA-122 was placed in a cadre status in anticipation of becoming the Marine Corps’ first F-14A squadron. With the decision not to accept the Tomcat into the Marine Corps inventory, VMFA-122 was reactivated at MCAS Beaufort, South Carolina and refitted with the F-4J in September 1975. On September 25, 1985, VMFA-122 flew its last F-4 sortie, completing 20 years of service as a F-4 “Phantom” squadron.
On January 22, 1986, the squadron began a new era with the acceptance of its first F/A-18A Hornet. Throughout the 1980s, 1990s, and into the 2000s (decade), VMFA-122 conducted multiple training deployments to Europe and throughout the United States.
Global War on Terror

In October 2001, the Crusaders increased their combat capabilities by transitioning to the F/A-18C. The squadron participated in the Unit Deployment Program (UDP), completing eleven deployments to the Western Pacific. From July 2002 to July 2003, the Crusaders completed a year-long UDP due to the “stop-move” order implemented by the Marine Corps. This allowed Hornet squadrons from Beaufort to deploy to Kuwait in anticipation of Operation Iraqi Freedom (OIF) in January 2003. The Crusaders were dispatched from MCAS Iwakuni to many locations in the Pacific Rim, including Marine Corps Air Facility Kaneohe Bay in Hawaii and Clark AB in the Philippines. In January 2005, the “Crusaders” continued the UDP rotation, deploying to MCAS Iwakuni, Japan. In September 2006 the “Crusaders” again returned to MCAS Iwakuni with detachments to Clark AB in the Philippines, Kadena Air Force Base on Okinawa, and Khorat, Thailand.
Prior to another squadron deployment in support of OIF later in 2008, the squadron’s commander reverted the unit to their older World War II nickname, the Werewolves.[4] The squadron began its first combat deployment in more than 30 years when it left MCAS Beaufort on August 29, 2010 for Kandahar Airfield, KAF.[5][6] The Werewolves returned from their seven-month deployment on March 21, 2009.[7] In April, 2012, the new commander of VMFA-122, LtCol Wiegel, decided the squadron would revert to the “Crusaders” nickname. However, after the nonprofit Military Religious Freedom Foundation threatened to sue the military under the Establishment Clause to forbid the Crusaders name and logo, the Marine Deputy Commandant for aviation directed VMFA-122 to revert the unit identification back to “Werewolves” 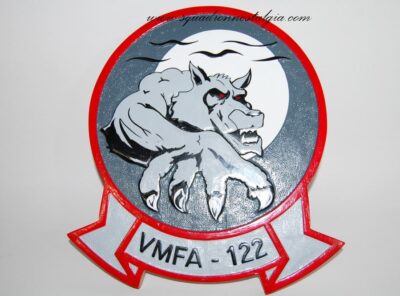 VMFA-122 Werewolves Plaque Fly with the Werewolves of VMFA-122 in this handcrafted plaque. Each piece is carefully carved from wood and hand painted to provide a piece you’ll love. World War II Marine Fighter Squadron 122 (VMF-122) was commissioned on … Read More 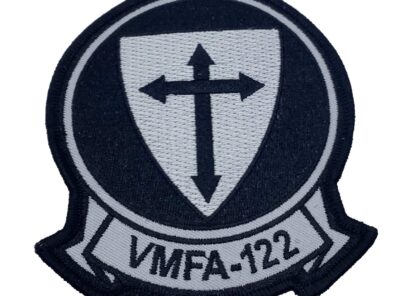 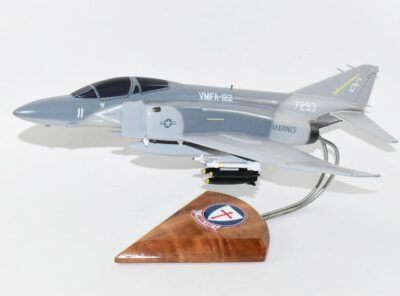 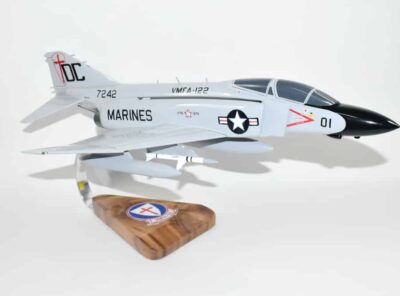 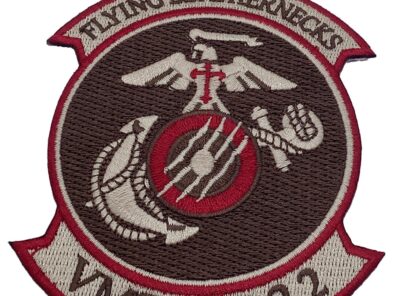 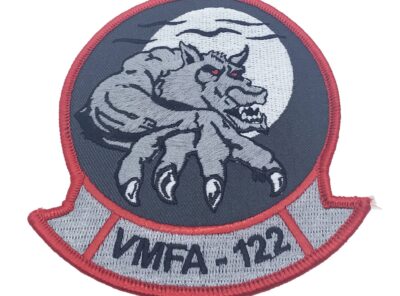 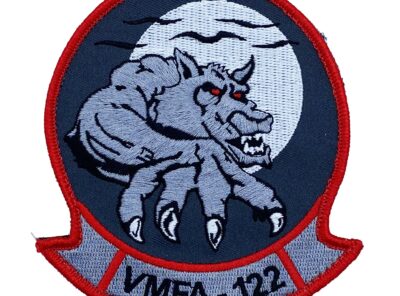 A 4″ with Hook and Loop Squadron Patch of the VMFA-122 Werewolves. 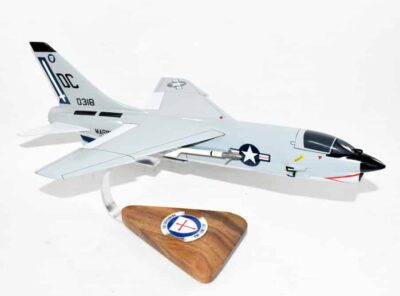