Born during the national call-to-arms immediately following the Japanese attack on Pearl Harbor, Marine Fighting Squadron 311 (VMF-311) was first commissioned on 1 December 1942, assigned to the 3rd Marine Aircraft Wing and headquartered at MCAS Cherry Point.[1].[2] Quickly transitioning from a training squadron flying the SNJ Texan to a combat squadron flying the F4U Corsair, VMF-311 participated in what was one of the earliest American catapult operations involving the Corsair when 21 F4Us launched from USS Nassau on October 6, 1943. By this time the squadron formed part of MAG-31. During World War II, VMF-311 was one of the first to utilize and develop tactics for the Corsair in a ground attack mode, foreshadowing the squadron’s future role as an attack squadron. Indicative of its combat effectiveness the squadron destroyed 71 Japanese aircraft in a four-month period during the Battle of Okinawa in 1945. The end of World War II saw VMF-311 leaving Chimu Airfield on Okinawa to start occupational duty flying from Yokosuka airfield on Japan’s mainland.

Occupational duty in Japan lasted till May 1946, when MAG-31 was notified to prepare for the termination of its Japanese assignment; VMF-311 was going home.[5] Between July 1946 and April 1947 the squadron had a sleeping existence and being transferred to MAG-32 and later MAG-12 while consisting of one officer, but in 1949 VMF-311 became the first West Coast Marine jet squadron when it started flying the TO-1 Shooting Star. Coincidentally the squadron was re-designated Marine Fighter Squadron 311 (VMF-311) and around that time acquired the code letters WL, phonetically pronounced as “William Love,” but from which also came the nickname “Willy Lovers”. The squadron quickly transitioned to the F9F Panther in October 1949 and found itself once again preparing for war by November 1950, arriving once again at Yokusuka airfield in Japan.

Arriving in Korea on December 7, 1950, VMF-311 was the first land-based Marine jet squadron to be used in combat providing close air support for the Marines and Soldiers on the ground.[7] In late-June 1952 the squadron participate in the attack on the Sui-ho Dam. Additionally the squadron pioneered strip-alert tactics still practiced today. Legendary pilots during this era included later astronaut and Senator John Glenn and baseball star Ted Williams. In over ​2 1⁄2 years of action in Korea the squadron amassed 18,851 combat sorties. In 1957, the squadron finally was re-designated Marine Attack Squadron 311 (VMA-311). The nickname “Tomcats” was also bestowed during this era.

The first A4D-2 Skyhawk was received by the “Tomcats” in the summer of 1958, initiating 30 years of Skyhawk service. In May 1965 the squadron, now flying A-4Es, deployed to Chu Lai Air Base in the Republic of Vietnam and on June 2, they conducted their first combat mission of the Vietnam War. In August 1965, VMA-311 supported the 7th Marine Regiment in Operation Starlite—the first major American operation of the war.[8] After almost eight years of operations in Vietnam the Tomcats totaled 54,625 combat sorties before leaving in January 1973. Among the sortie count was an amazing four-day sortie total of 240 from 5 to 8 May 1968 in support of their fellow marines during the Battle of Khe Sanh. During most of their time they were based at Chu Lai.[9] The squadron flew the last Marine Corps sorties out of Chu Lai on September 11, 1970.[10] In May 1972 VMA-311 once again deployed to Vietnam with MAG-12 Forward at Bien Hoa Air Base, Vietnam. Their final sortie in-country would occur on January 29, 1973, a day before they would drop the last ordnance from a Marine A-4 Skyhawk during the war. VMA-311 would fly 54,625 combat sorties during their time supporting operations in Vietnam, Laos and Cambodia.

In 1988 VMA-311 received its first AV-8B Harrier and shortly thereafter headed into harm’s way again. On August 11, 1990, after the Iraqi invasion of Kuwait, VMA-311 deployed in support of Operation Desert Shield, leading all other Marine fixed-wing squadrons into Saudi Arabia where they were based out of King Abdulaziz Naval Base. While there, the Tomcats were the most forward deployed fixed-wing squadron. On January 17, 1991 while in support of Operation Desert Storm the squadron became the first to utilize the AV-8B in combat when a flight of four Harriers destroyed an Iraqi artillery position in support of the Battle of Khafji. During 43 days of air combat operations, Tomcat pilots flew 1,017 combat missions and delivered 840 tons of ordnance against enemy targets throughout Kuwait and Southern Iraq.

On January 15, 2003, the Marines of VMA-311 deployed to the Northern Persian Gulf as part of Amphibious Task Force West. On March 21, 2003, almost 59 years to the day after VMF-311’s first combat sortie in World War II, the Tomcats flew their first combat sortie of Operation Iraqi Freedom. During the war they flew over 550 sorties while dropping 77 tons of precision ordnance, destroying or neutralizing 132 Iraqi targets while operating from two amphibious assault carriers, USS Bonhomme Richard and USS Tarawa. The Tomcats returned from the Persian Gulf on July 24, 2003. In 2008, they later deployed in support of the 15th Marine Expeditionary Unit, while simultaneously sending a detachment of Marines and Harriers to Iraq in support of Operation Iraqi Freedom. These deployments were soon followed in 2010 with deployments again to the 15th MEU, and a Unit Deployment Program to the Pacific region. While there, the Tomcats spent over two months aboard USS Essex with the 31st MEU while participating in the multilateral exercises Cobra Gold 2010 and Balikatan 2010. VMA-311 deployed to Camp Bastion, Helmand Province, Afghanistan in support of Operation Enduring Freedom from April to September 2013.

Squadron aces
A flying ace or fighter ace is a naval aviator credited with shooting down five or more enemy aircraft during aerial combat. The following Marines from VMA-311 have been credited with more than five victories: 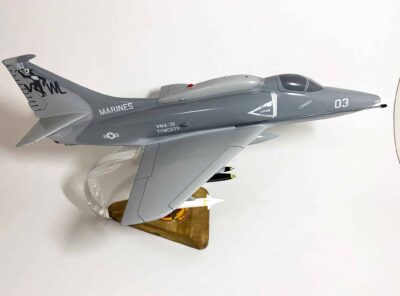 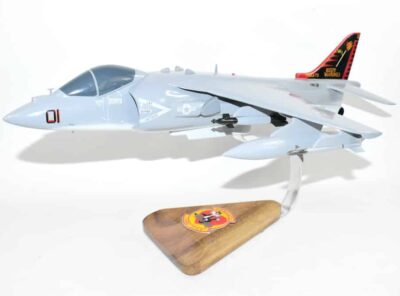 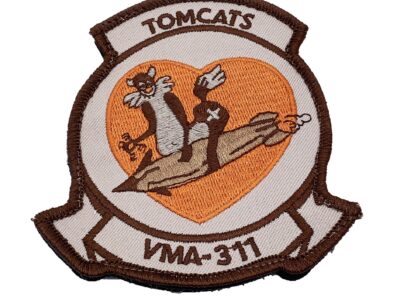 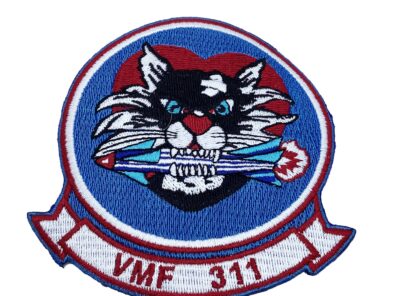 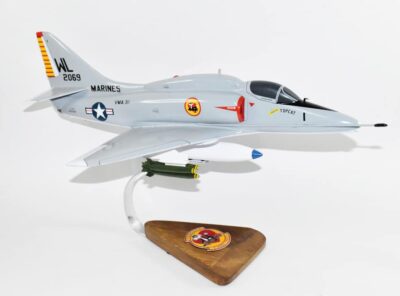 VMA-311 Tomcats 152069 1970 A-4E Model Fly with the VMA-311 Tomcats in this handcrafted A-4E Model. Each piece is carved from wood and handpainted to provide a piece you’ll love. Length – 18 inches Made from Mahogany US Veteran Owned … Read More 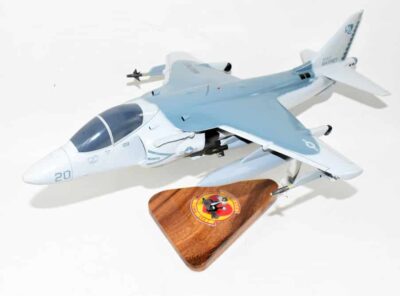 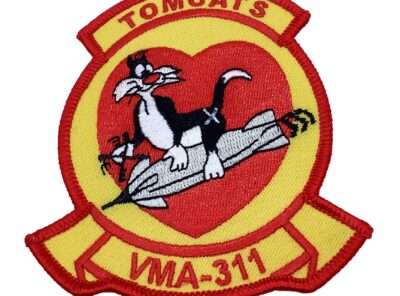 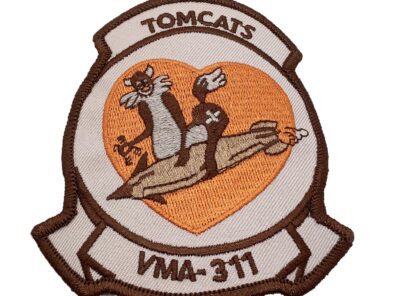