World War II
Marine Fighter Squadron 214 was originally commissioned on July 1, 1942, at Marine Corps Air Station Ewa, on the Island of Oahu. Initially called the “Swashbucklers,” they participated in the Solomon Islands campaign, flying out of Henderson Field on Guadalcanal. They were disbanded following their combat tour and the squadron designation was given to the Marine command on Espiritu Santo.
In August 1943, a group of twenty-seven young men under the leadership of Major Gregory “Pappy” Boyington (who was later awarded the Medal of Honor) were joined together to form the original “Blacksheep” of VMF-214. Major Boyington had just returned from a year’s tour in China as a member of the 1st American Volunteer Group (nicknamed the Flying Tigers), and had been credited with multiple kills of Japanese aircraft.[1] The squadron was not assigned any aircraft or ancillary personnel at first and flew to Guadalcanal and later the Russell Islands in borrowed planes that were in less than satisfactory condition.[2] On the evening of September 13, 1943, the men of VMF-214 gathered in their commanding officer’s hootch during which time it was suggested that they needed a nickname. Originally the squadron called itself “Boyington’s Bastards” after its new commander, the fact that all of the pilots had been orphans and not attached to a squadron when they got together, and the fact they possessed few reliable planes and no mechanics. The following day, this new label was presented to the Marine Corps public information officer on the island at the time, Captain Jack DeChant, and found to be unacceptable because civilian newspapers would never print it. DeChant then suggested the call sign “Black Sheep” because the expression meant essentially the same thing.[3] The pilots ranged from experienced combat veterans, with several air-to-air victories to their credit, to new replacement pilots from the United States. Major Boyington and Major Stan Bailey were given permission to form the unassigned pilots into a squadron, with the understanding that they would have less than four weeks to have them fully trained and ready for combat. Although they dropped the moniker “Boyington’s Bastards,” the squadron still retains the black bar of bastardy across its shield.[4] They chose for their badge the black shield of illegitimacy, the bar sinister, a black sheep superimposed, surrounded by a circle of twelve stars, and crowned with the image of their aircraft, the F4U Corsair.

F4U-1 Corsair of 1st Lt Rolland N. Rinabarger of VMF-214
The Black Sheep squadron fought for eighty-four days. They met the Japanese over their own fields and territory and piled up a record of 203 planes destroyed or damaged, produced nine fighter aces with 97 confirmed air-to-air kills, sank several troop transports and supply ships, destroyed many installations, in addition to numerous other victories. For their actions, the original Black Sheep were awarded the Presidential Unit Citation for extraordinary heroism in action. Following their first combat tour, 26 pilots from the squadron left the airfield at Munda for a week of rest and relaxation in Sydney, Australia where they holed up in the Australia Hotel.[5] The Black Sheep ended their second combat tour on January 8, 1944, five days after Major Boyington was shot down and captured by the Japanese. The original Black Sheep were disbanded and the pilots were placed in the pilot pool in Marine Aircraft Group 11. Exploits of this incarnation of the unit were loosely fictionalized in the 1970s television series Baa Baa Black Sheep, later renamed Black Sheep Squadron, starring Robert Conrad as Boyington.
VMF-214 was reformed on January 29, 1944 at Marine Corps Air Station Santa Barbara near Goleta, California. They deployed aboard the USS Franklin (CV-13) on February 4, 1945 to join on-going operations on Okinawa. On March 19, a Japanese bomber hit the USS Franklin. The explosion and resulting fire caused 772 deaths aboard the Franklin including 32 Black Sheep members. Many Black Sheep aircraft were launching for a strike on mainland Japan at the time. One, First Lieutenant Ken Linder, was given half credit for shooting down the Japanese bomber that struck the Franklin. This ended VMF-214 involvement in World War II. During the course of the war, the squadron suffered 23 pilots killed in action or missing and lost 48 aircraft to accidents or enemy contact.[6] In April 1945, the Black Sheep were relocated to Marine Corps Air Station El Centro, California, and then to MCAS El Toro, CA in October 1945. In the next few years, the Black Sheep deployed for operations on board the USS Rendova (CVE-114), the USS Bairoko (CVE-115), the USS Badoeng Strait (CVE-116), and the USS Boxer (CV-21). 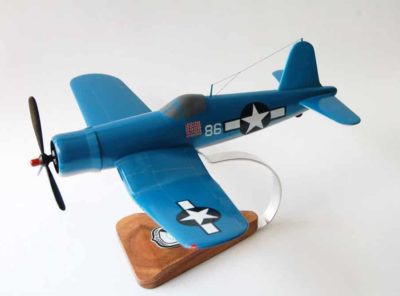 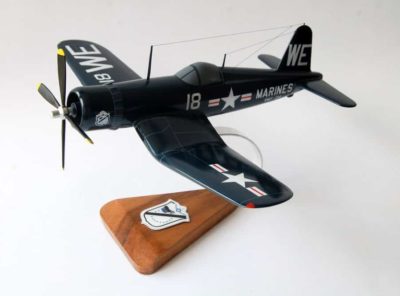