There have been three distinct squadrons known as the Rough Raiders. The first began as Reserve Attack Squadron FIFTY FIVE E (VA-55E), most likely established in 1946 but remaining in an inactive status until redesignated Reserve Attack Squadron NINE HUNDRED TWENTY THREE (VA-923) in January 1950. This squadron was redesignated VA-125 on 4 February 1953 and was disestablished on 10 April 1958.

The second squadron, originally known as the Skylanchers was established as Attack Squadron TWENTY SIX (VA-26) on 30 June 1956. This squadron became a Replacement Air Group was redesignated as VA-125 Rough Raiders on 11 April 1958 (the day after the first VA-125 was disestablished) flying the F9F Cougar from NAS Moffett Field. In July 1961, the squadron moved to Reeves Field, NAS Lemoore, California. From that point until the fall of 1969, the squadron flew all models of the A-4 Skyhawk, sending over 2,000 replacement pilots and 12,000 maintenance personnel to the Pacific Fleet. During this period, the squadron had over 100 A-4’s and 1,400 officers and enlisted personnel assigned, making it the largest aviation squadron in the Navy. In September 1969, the “Rough Raiders” received their first A-7 Corsair II. The squadron trained more than 700 A-7 A/B/C replacement pilots and 5,500 maintenance personnel. The end of the Vietnam air war caused a reduction in force which eventually led to the disestablishment of the squadron on 1 October 1977.

The current VFA-125 “Rough Raiders” were established on 13 November 1980 at NAS Lemoore, California, becoming the Navy’s first F/A-18 squadron. Often, a new squadron will assume the nickname, insignia, and traditions of earlier squadrons, but officially, the US Navy does not recognize a direct lineage with disestablished squadrons if a new squadron is formed with the same designation.[1] VFA-125 received its first aircraft in April 1981, and by March 1985, had amassed over 30,000 mishap-free flight hours in the Hornet.

On 1 October 2010, VFA-125 was disestablished as an F/A-18 Fleet Replacement Squadron, and its aircraft and personnel were incorporated into VFA-122. It is planned that VFA-125 will be reestablish as an F-35 Lightning II training squadron in the future 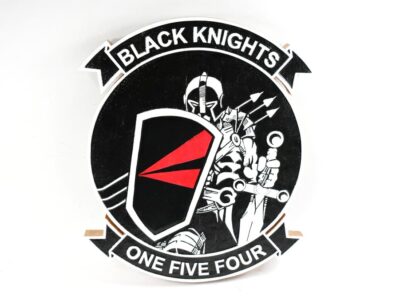 VAQ-130 Zappers Hang your squadron lineage in the goat locker with this VAQ-130 Zapper plaque that has been carved from wood and hand painted. 14 inches Electronic Attack Squadron One Three Zero is the oldest electronic warfare squadron in the … Read More