A squadron patch of the VF-96 Fighting Falcons with plastic backing.

Fighter Squadron 96, or VF-96 Fighting Falcons was an aviation unit of the United States Navy in service from 1962 to 1975. When assigned to Carrier Air Wing Nine (CVW-9) their tailcode was NG, and their radio callsign was Showtime. Originally established as United States Naval Reserve squadron VF-791 Fighting Falcons on 20 July 1950 it was redesignated VF-142 after becoming a regular squadron on 4 February 1953. It was re-designated VF-96 on 1 June 1962 and disestablished on 1 December 1975.

VF-142 was assigned to Carrier Air Group 14 (CVG-14) aboard USS Randolph for a Mediterranean deployment from 3 February to 6 August 1954.

VF-96 was assigned to Carrier Air Wing Nine aboard the aircraft carrier USS Ranger for a deployment to the Western Pacific from 9 November 1962 to 14 June 1963.

On 9 April 1965 an F-4B #151425 from VF-96 crashed into the sea following an engine flameout on launch for a four-plane combat air patrol.[3] Later during the patrol an F-4B #151403 piloted by Lieutenant j.g. Terence M. Murphy and his RIO, Ensign Ronald Fegan, shot down a Chinese MiG-17 “Fresco” near Hainan, scoring the F-4 Phantom’s first air-to-air victory. The Phantom was then shot down either by another MiG or, as enemy reports later indicated, an AIM-7 Sparrow from one of Murphy’s and Fegan’s wingmen.[4][5] Murphy and Fegan were listed as killed in action, body not recovered.[6][7]

VF-96 embarked aboard the aircraft carrier USS Enterprise for a deployment to Vietnam from 26 October 1965 to 21 June 1966.

VF-96 embarked aboard USS America for a deployment to Vietnam from 10 April to 21 December 1970.

VF-96 again embarked on Constellation for its final Vietnam cruise from 5 January to 11 October 1973.

Between June 21 and December 23, 1974 the Fighting Falcons along with sister-squadron VF-92 made its last operational deployment with CVW-9, aboard Constellation, before being disestablished on December 1, 1975. 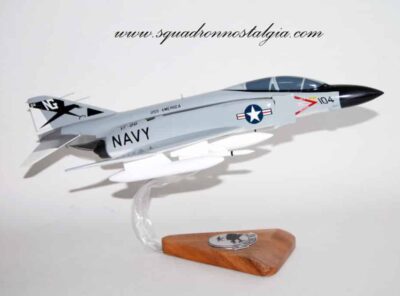 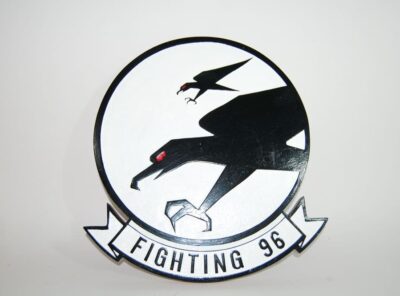