A 4 inch squadron patch of the VF-202 Superheats.

Fighter Squadron 202 (VF-202) nicknamed the Superheats was an aviation unit of the United States Naval Reserve initially based at Naval Air Station Dallas, Texas. Following that installation’s BRAC-directed closure, the squadron relocated to nearby former Carswell Air Force Base, which was transferred to U.S. Navy control pursuant to BRAC action and renamed Naval Air Station Joint Reserve Base Fort Worth / Carswell Field. VF-202 was established on 1 July 1970 as part of Reserve Carrier Air Wing 20 (CVWR-20), the U.S. Atlantic Fleet’s reserve carrier air wing, and disestablished on 31 December 1994.[1] During its service VF-202 could be identified by the tail code “AF” and nose numbers (MODEX) “200” through “213.”

In 1987, VF-202 transitioned to new-build Block 110 versions of the F-14A Tomcat, the last F-14A version built, receiving their first aircraft on 27 March 1987. Due to the squadron’s reserve status, the transition took longer than for an active unit, not being concluded until May 1988, when VF-202 carrier qualified with the F-14 aboard USS America.

VF-202 was equipped with two TARPS-capable aircraft giving the squadron an extra task after the RA-5C Vigilante and RF-8G Crusader had been phased out of service. As a TARPS unit, 1988 saw the squadron take part in the Reconnaissance Air Meet at Bergstrom Air Force Base, Texas, along with several other F-14 squadrons, including the Pacific Fleet Replacement Squadron, VF-124. Even with the force reduction after the end of the Cold War and continuing budget cuts, one would have expected that the TARPS capable squadron would not be disestablished. However, it was decided to disestablish VF-202 and make their F-14 sister squadron, VF-201, TARPS capable. VF-202 was accordingly disestablished on 31 December 1994 and its aircraft redistributed to active duty F-14 squadrons, primarily the formerly Atlantic Fleet, and now sole F-14 Fleet Replacement Squadron, VF-101 at NAS Oceana, Virginia. 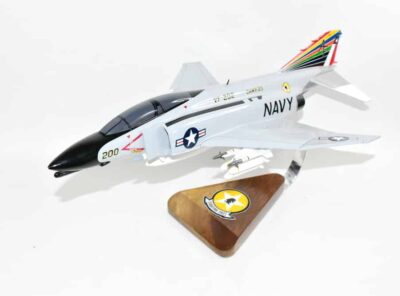 VF-202 Superheats F-4n (1977) Model Fly with the Superheats of the VF-202 in this handcrafted F-4b with livery from 1977. Each piece is carved from wood and hand painted to provide a piece you’ll love. 18 inches Fighter Squadron 202 … Read More 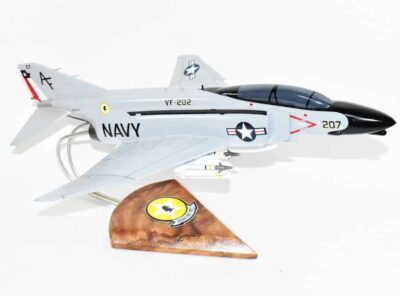 VF-202 Superheats 1977 F-4b Model Fly with the Superheats of the VF-202 in this handcrafted F-4b with livery from 1977. Each piece is carved from wood and hand painted to provide a piece you’ll love. Length- 18 inches Made from … Read More 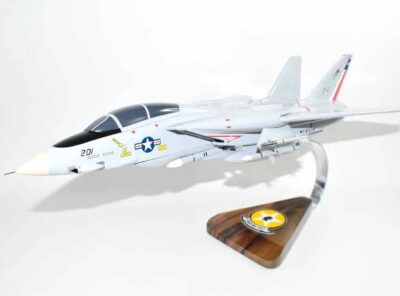 VF-202 Superheats F-14 Model Fly with the Superheats of the VF-202 in this hand crafted F-14 model. Each piece is carved from wood and hand painted to provide a piece you’ll love. Model has wings that move. It is made … Read More