A 14 inch piece of carved Mahogany carefully carved and painted to provide a unique and colorful piece of the VF-121 Pacemakers to proudly display.
VF-121 (Fighter Squadron 121) of the US Navy was a former Pacific Fleet Replacement Air Group (RAG) unit that, by the time of its disestablishment (30 September 1980), Originally established as VF-781, a reserve squadron on 2 August 1950, it was redesignated as VF-121 on 4 February 1953 and disestablished on 30 September 1980.[1] On 11 April 1958 changed duty from Fleet Squadron to the Fleet Replacement Squadron and was later was charged with the training of Navy F-4 Phantom flight and maintenance crews. VF-121 is best known as the original host unit for the Navy’s Fighter Weapons School, more popularly known world-wide as Top Gun. 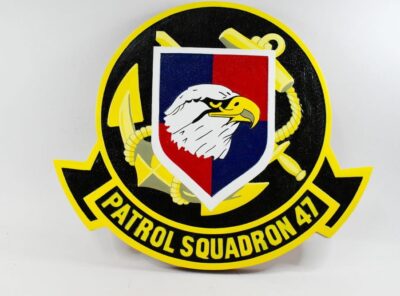