Fleet Composite Squadron (VC) 8, the Navy’s last operator of the A-4 Skyhawk jet, was deactivated in ceremonies held 23 August 2003 (officially 30 September) at NAS Oceana, Va., after 45 years of service. Cdr. Thomas McDonough was the last CO of the Redtails. VC-8 was the last Navy squadron based at Naval Station Roosevelt Roads, P.R., and ceased operations there in early 2003 after the closure of the Atlantic Fleet Weapons Training Facility on the island of Vieques. The Redtails, who most recently operated TA-4J Skyhawks and UH-3H Sea King utility helicopters, provided services to fleet units training in the area. The closure of Vieques in March 2003 eliminated the need to maintain VC-8 in service.

VC-8 traced its origins to Guided Missile Service Squadron 2, established at NAS Chincoteague, Va., on 1 July 1958. The squadron moved to Roosevelt Roads in 1959 and on 1 July 1960 was redesignated Utility Squadron (VU) 8, which became VC-8 on 1 July 1965. Its mission of providing target services to the fleet required it to operate a wide variety of aircraft, and soon the squadron was flying one of the most diverse inventories of aircraft in the Navy. During its first decade, VC-8 operated KDA, Q2C and BQM-34 Firebee drones; QF-9F/Gs (fighters converted to drones); DB-26J, DF-1D,
DF-8A/F, DF-9F, DT-28B, DT-33B, DP-2E/H and US-2C aircraft for drone control and target towing; and UH-34E/G and SH-34G Seahorse helicopters for target and torpedo retrieval, rescue and utility roles.

During the 1970s, the squadron’s stable of aircraft changed to A-4C and TA-4J Skyhawks and SH-3A/G and RH-3A Sea King helicopters, while retaining DP-2E/H and EP-2H Neptunes, which were used for a variety of special projects as well as launching Firebee drones. During the 1980s, dissimilar air combat maneuvering training became a more prominent role for VC-8 and its TA-4Js. The squadron’s SH-3Gs were replaced by SH-3Hs, which became UH-3Hs during the late 1990s. 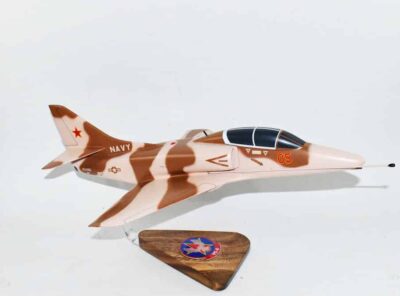 VC-8 Red Tails TA-4J Model Fly with the VC-8 Red Tails in this hand crafted VC-8 Red Tails. Each model is carved from wood and hand painted to provide a unique piece that will always be treasured. Length- 18 inches … Read More 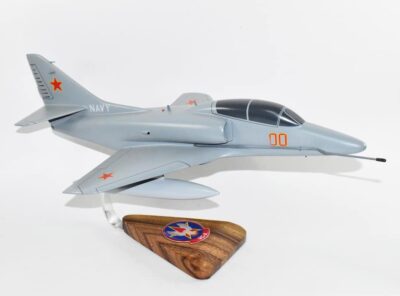