One week after its establishment, VAW-113 deployed to the Western Pacific (WESTPAC) aboard USS Constellation. VAW-113 served in the Vietnam War from 1967 to 1975. The culmination of these efforts occurred in April 1975, when VAW-113 played a vital role in Operation Frequent Wind, the evacuation of American personnel from Saigon.

1990s
During their WESTPAC 1990 cruise, VAW-113 again deployed to the Gulf of Oman, providing both sea and air cover to Battle Group Delta and allied forces in the Persian Gulf as one of the first units deployed after the Iraqi invasion of Kuwait in August 1990. The squadron spent over three months in the Gulf of Oman in support of Operation Desert Shield prior to their return to San Diego in December 1990.

In May 1992, the squadron and Carrier Air Wing Fourteen (CVW-14) took part in Roving Sands, the largest integrated air defense exercise in the continental United States. This was the first operational employment and successful test of the technology incorporated in the E-2C Group II. Significant improvements in this aircraft over its predecessors were its APS-145 radar, Joint Tactical Information Distribution System (JTIDS), enhanced high-speed processor (EHSP) computer, and Allison T56-A-427 engines.

In May 1996, the squadron made their fifteenth WESTPAC deployment, aboard USS Carl Vinson participating in Operations Desert Strike and Southern Watch in the Persian Gulf. Port visits along the way included Hong Kong, Singapore, and Tasmania.

The squadron again deployed on WESTPAC in June 1998, aboard USS Abraham Lincoln. The squadron’s departure marked the end of its basing at NAS Miramar. While on station in the Persian Gulf, VAW-113 flew missions supporting Operation Southern Watch. Port visits were made at Hong Kong, Singapore, Jebel Ali, Perth, Hobart, and Hawaii. At the end of the cruise, the squadron launched from USS Abraham Lincoln, flying into their new home at NAS Point Mugu, California. VAW-113 received the Battle Efficiency “E” award for 1998.

The squadron began WESTPAC 2000-01 on August 20, 2000, aboard USS Abraham Lincoln. The main focus of the deployment was to conduct Operation Southern Watch (OSW) and to maintain economic sanctions against Iraq. The squadron received their fifth Battle Efficiency “E”, the CNO Aviation Safety Award for E-2 squadrons and the Rear Admiral Frank Akers award for Airborne Early Warning excellence as the outstanding E-2 squadron in the entire Navy. In 2003, VAW-113 redeployed to the Persian Gulf to support, for a second time, Operation Southern Watch. On the way home, the ship was turned around in Australia and sent back to the Gulf to participate in the opening phases of Operation Iraqi Freedom. In April, USS Abraham Lincoln group returned home.

In May 2004, VAW-113 deployed on board USS John C. Stennis for airborne command and control in the Gulf of Alaska and to participate in Operation Northern Edge. Operating jointly with Air Force and Navy assets, the Strike Group practiced Maritime Interdiction and Defensive Counter Air missions. In July, the squadron participated in RIMPAC 2004. Following this exercise, USS John C. Stennis joined up with USS Kitty Hawk for a Joint Air and Sea Exercise (JASEX). This second annual joint exercise sprawled across the Pacific from the Sea of Japan to the South China Sea. The Carrier Strike Groups focused on round the clock flight operations and battlespace management. The JASEX had to be halted periodically so each CSG could maneuver away from seven storms and typhoons. In late October 2004, USS John C. Stennis Carrier Strike Group returned to its homeport in San Diego, California.

In January 2006, the squadron, along with the CVW-14 and CSG-7 team, joined USS Ronald Reagan on its maiden voyage out of San Diego, California. The Carrier Strike Group transited the Western Pacific to relieve the Carrier Strike Group Two, led by USS Theodore Roosevelt, in the Persian Gulf. In support of Operation Sea Dragon III, the squadron was the first squadron to employ the new ALQ-217 ESM system.[1] In addition, VAW-113 flew over 100 sorties, with a 99% combat sortie completion rate, in support of convoys on the ground during Operation Iraqi Freedom. On the way home, USS Ronald Reagan met up with USS Abraham Lincoln and USS Kitty Hawk Strike Groups for Exercise Valiant Shield.

In January 2007, the squadron again deployed with the CVW-14 and CSG-7 team, on board USS Ronald Reagan on a Surge/Western Pacific (WESTPAC) deployment in which they took part in exercise Foal Eagle. The squadron returned home in April 2007.

In May 2008, the squadron, along with CVW-14 and CSG-7 embarked on board USS Ronald Reagan for a Western Pacific (WESTPAC) deployment. During the WESTPAC, the squadron provided support for Operation Enduring Freedom and following a typhoon, took part in humanitarian efforts for the Philippine Islands. In addition, VAW-113 flew over 400 sorties with a 98% completion rate, won the CVW-14 Golden Wrench award for maintenance excellence and earned another Battle Efficiency “E” award.

In May 2009, the squadron, along with CVW-14 and CSG-7 embarked on board USS Ronald Reagan for the SURGE 09 deployment. The squadron achieved a 99.6% mission completion rate and became back-to-back Battle Efficiency “E” award winners by winning the FY 09 award, as well as another CVW-14 Golden Wrench award for maintenance excellence.

2010s
In 2010 VAW-113 completed a work-up cycle which included the multinational RIMPAC 2010. In February 2011, the squadron deployed aboard the USS Ronald Reagan in support of Operation New Dawn in Iraq and Operation Enduring Freedom in Afghanistan. In March, during the transit across the Pacific, the squadron was called into action following the devastating 2011 Tōhoku earthquake and tsunami in Japan. The squadron provided the airborne command of the relief effort using their Hawkeye 2000s in Operation Tomodachi. Commander of Naval Air Forces awarded the squadron with their tenth Battle “E” Award for their efforts.

Be the first to review “VAW-113 Black Eagles Plaque” 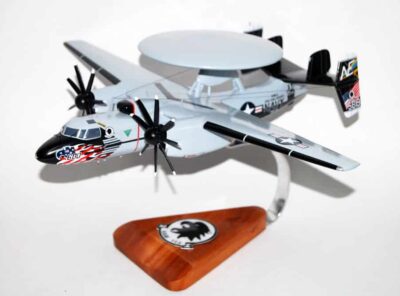 VAW-113 Black Eagles 2017 E-2D Model Fly off with the Black Eagles of VAW-113 in the hand crafted E-2D model. Each model is carefully carved from wood and hand painted to provide a unique piece you’ll love. Length -13.5 inches … Read More 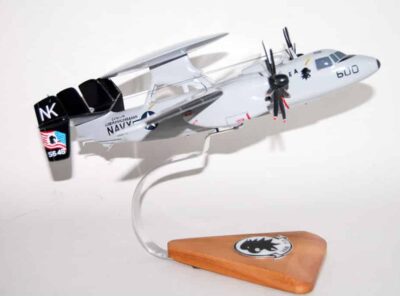 VAW-113 Black Eagles E-2C Model Fly off the USS Reagan with the Black Eagles of VAW-113 in the hand crafted E-2C model. Each model is carefully carved from wood and hand painted to provide a unique piece you’ll love. Length … Read More 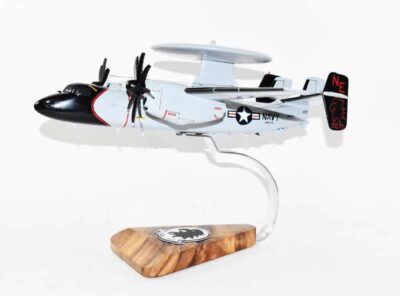 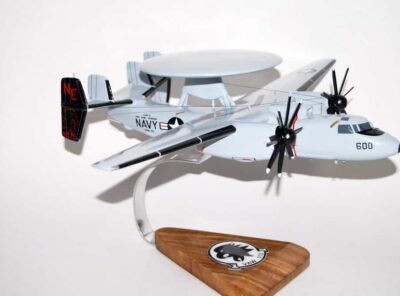