Fly with the VAW-110 Firebirds in this hand crafted E-2C model. Each piece is carefully carved and hand painted to provide a piece you’ll love.

The 94th Fighter Squadron is a unit of the United States Air Force 1st Operations Group located at Joint Base Langley–Eustis, Virginia. The 94th is equipped with the F-22 Raptor.

The 94 FS is one of the oldest units in the United States Air Force, first being organized on 20 August 1917 as the 94th Aero Squadron of the United States Army Air Service at Kelly Field, Texas. The squadron deployed to France and fought on the Western Front during World War I as a pursuit squadron. It took part in the Champagne-Marne defensive; Aisne-Marne offensive; St. Mihiel offensive, and Meuse-Argonne offensive.

In 1924, it was consolidated with the 103d Aero Squadron (Pursuit). The 103d was largely composed of former members of the French Air Service Lafayette Escadrille (from the French Escadrille de Lafayette). This was a squadron of American volunteer pilots who had joined the French Air Service prior to the United States entry into the war on 6 April 1917. In July 1926, with the disestablishment of the U.S. Army Air Service, the squadron became part of the U.S. Army Air Corps (USAAC).

In June 1941, the squadron became part of the renamed U.S. Army Air Forces (USAAF). During World War II the unit served in the Mediterranean Theater of Operations (MTO) as part of Twelfth Air Force as a P-38 Lightning fighter squadron, participating in the North African and Italian campaigns. In September 1947, it became part of the newly established United States Air Force (USAF). During the Cold War it was both an Air Defense Command (ADC) fighter-interceptor squadron, and later as part of Tactical Air Command (TAC). It was one of the first USAF operational squadrons equipped with the F-15A Eagle in January 1976.[3][4] With the disestablishment of TAC in 1992, it was assigned to the newly established Air Combat Command (ACC). 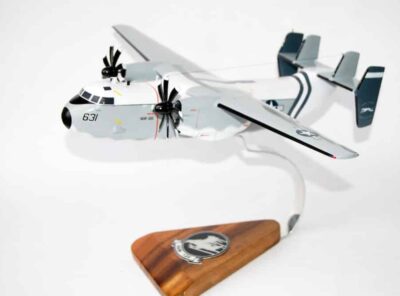 VAW-120 Greyhawks C-2 greyhounds Capture what it was like to fly with VAW-120 Greyhawks in this 18 inch C-2 model. You’ll proudly be able to display this carefully crafted wooden model. The squadron was originally established on 6 July 1948 … Read More 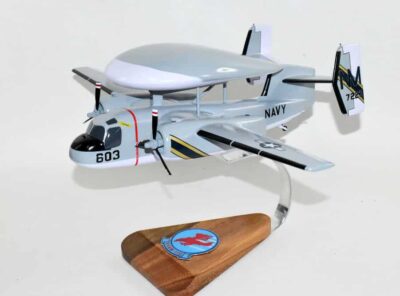