This is a 4″ with Hook and Loop squadron patch of the VAQ-140 Patriots.

The history of Electronic Attack Squadron ONE FOUR ZERO is studded with exceptional accomplishments and proud traditions. As a premier Navy front line Electronic Attack squadron, the “Patriots” have participated in 16 overseas deployments; thirteen involving combat. The squadron has flown the EA-6B Prowler and EA-18G Growler from the decks of four different aircraft carriers and has garnered every major Naval unit award, including the Battle ‘E’, Safety ‘S’, Golden Anchor, Radford Award, and the Hughes Award for Tactical Excellence.

Established in October 1985, VAQ-140 was immediately tasked with the evaluation and testing of the AGM-88 High-speed Anti-Radiation Missile (HARM), and became the first Prowler squadron to operationally deploy with HARM aboard the USS JOHN F. KENNEDY (CV67) in August 1986. The Patriots were deployed aboard the USS DWIGHT D. EISENHOWER (CVN69) for the beginning of Operation DESERT SHIELD in September 1991. The Patriots and IKE returned to the Arabian Gulf for Operation SOUTHERN WATCH. May 1994 saw the Patriots deploy aboard the USS GEORGE WASHINGTON (CVN73) to participate in the 50th D-Day Anniversary, and support OSW in Iraq, as well as DENY FLIGHT and SHARP GUARD in Bosnia, earning the Battle “E” for their efforts. The Patriots took their first Expeditionary role supporting combat operations over the Balkans with the 31st Air Expeditionary Wing out of Aviano Airbase, Italy. In 1999, in support of Operation ALLIED FORCE, they assumed Command of Electronic Attack Wing Aviano, which consisted of 100 Aircrew and 300 Support Personnel. While flying over 740 combat missions and 3300 flight hours, 117 HARM were fired against the enemy, earning the Patriots a Navy Unit Commendation Medal.

The Patriots returned to their first ship, the USS JOHN F. KENNEDY (CV67), for another combat deployment in 2002, during which the Patriots detached to Al-Udeid Airbase in Qatar, and achieved a 100% combat sortie completion rate. VAQ-140 again deployed aboard the USS GEORGE WASHINGTON (CVN73) in January 2004 supporting Operation IRAQI FREEDOM with another 100% sortie completion rate. In May 2005 the Patriots found themselves in the expeditionary role once again, deploying to MCAS Iwakuni Japan, and earning the CNO Safety “S” for 2004.

In 2006 the Patriots left home yet again to begin an eight month extended deployment. This deployment would see the Patriots meeting the challenge of split site operations with half of the squadron operating out of Al Asad, Iraq and half the squadron operating off of the USS EISENHOWER. The Patriots made history on November 9th, 2006 when two VAQ-140 Patriot jets flew simultaneous combat missions in two different combat zones in support of both Operation IRAQI FREEDOM and Operation ENDURING FREEDOM.

In April 2008, the Patriots received the first of four ICAP III Prowlers, greatly enhancing their capabilities through new software and weapon systems. After an extremely successful work-up period, the Patriots deployed in February 2009 aboard the USS DWIGHT D. EISENHOWER in support of Operation ENDURING FREEDOM, flying over 143 sorties and 918 combat hours. The PATRIOTS again deployed in January 2010, earning them the Battle “E” and are currently conducting combat flight operations in support of ENDURING FREEDOM.

The summer of 2011 saw the Patriots returning back to the combat arena in an expeditionary role deployed to Aviano Air Base, Italy in support of Operation UNIFIED PROTECTOR and NATO operations over Libya. Throughout this deployment, the Patriots maintained an 100% sortie completion rate while compiling 164 sorties and 1086 combat hours.

Following their return to NAS Whidbey Island, the Patriots embarked on a grueling pre-deployment workup schedule, which saw the squadron conduct a detachment to Naval Air Station Fallon for Airwing Fallon, and three detachments to the USS DWIGHT D. EISENHOWER for TSTA and COMPUTEX. At the conclusion of their workup cycle, the Patriots embarked on a six and a five month deployment with a two month break back in Whidbey in support of Operation Enduring Freedom and maritime security operations in the 5th Fleet Area of Responsibility. These cruises marked the last time the PATRIOTS would deploy with the E/A-6B Prowler. During 2012, the PATRIOTS were awarded the Medical Blue “M”, the Safety “S”, the Golden Wrench, the Battle “E” and the Radford award.

The Patriots are celebrating 30 years of Class Alpha Mishap free flying; after leading the way in operational tempo, readiness, training, and combat employment of the EA-6B Prowler, the PATRIOTS completed transition to the E/A-18G Growler in July of 2014. From the decks of carriers or from an expeditionary airfield in a far away land, VAQ-140 continues to dominate all enemies in the execution of the Electronic Attack Mission day or night, in any weather. 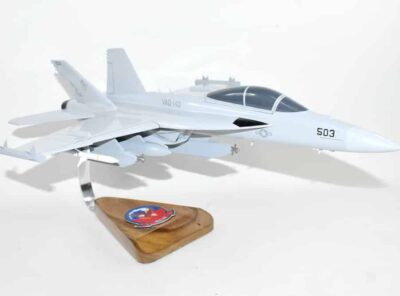 VAQ-140 Patriots EA-18G Growler Model Fly off the USS Truman again with the VAQ-140 Patriots in this 18 inch wooden EA-18G. Each model is carved from wood and hand painted to provide a unique treasure that you’ll love. Length – … Read More 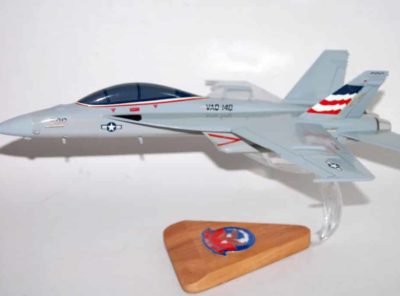 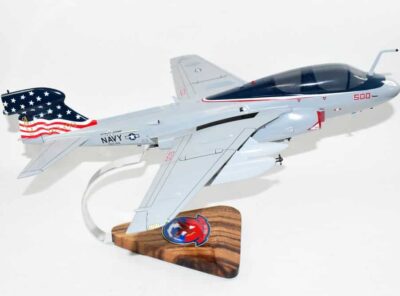