Fly with the Ravens of VA-93 in this handcrafted A-7 model. Each piece is carved from wood and handpainted to provide a piece you’ll love.

May 1963: Following the military losses of the Lao neutralist to the Pathet Lao in the Plaine de Jarres, Laos, USS Ranger (CV-61) transited to the South China Sea to support possible operations in Laos.
15 Oct 1963: The squadron established a Detachment Q for deployment aboard the anti-submarine carrier USS Bennington (CVS 20) to provide daylight fighter protection for the ASW aircraft. The detachment flew A-4B Skyhawks.
7 Feb 1965: Following a Viet Cong attack against the American advisors compound at Pleiku, South Vietnam, a reprisal strike, named Operation Flaming Dart, was ordered by President Johnson. VA-93 participated in this strike, but upon reaching the target, the military barracks at Vit Thu Lu, the mission was aborted due to the weather.
11 Feb 1965: Participated in Operation Flaming Dart II, retaliatory strikes against the military barracks at Chanh Hoa, North Vietnam.
15 Mar 1965: Participated in Operation Rolling Thunder strikes against ammunition storage area in Phu Qui, North Vietnam.
May–Oct 1972: Participated in Operation Linebacker, heavy air strikes against targets in North Vietnam to reduce that country’s ability to continue the war effort in South Vietnam.
Apr 1975: Participated in Operation Frequent Wind, the evacuation of American personnel from Saigon, South Vietnam as the country fell to the communists.
Aug–Sep 1976: Operated near the Korea Peninsula following the Axe murder incident.
Nov–Dec 1979: In response to the seizure of the American Embassy and its staff, and the Soviet invasion of Afghanistan, USS Midway (CV-41) operated in the Arabian Sea.
May–Jun 1980: Following the Kwangju Massacre in South Korea, Midway operated off the coast of South Korea until the crisis had subsided.
Dec 1981: Following unrest in Korea, Midway operated off the coast of South Korea for several days. 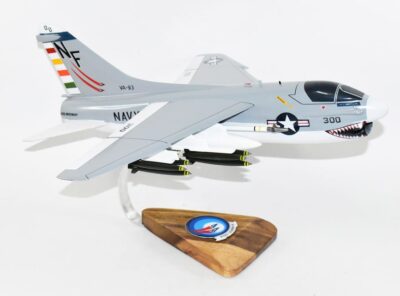 Fly with the Ravens of VA-93 in this handcrafted A-7a model. Each piece is carved from wood and handpainted to provide a piece you’ll love. 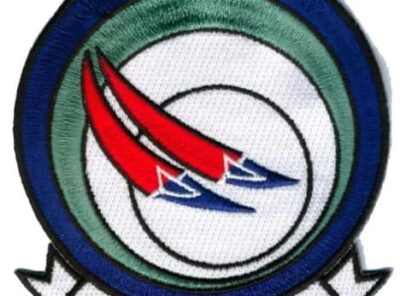 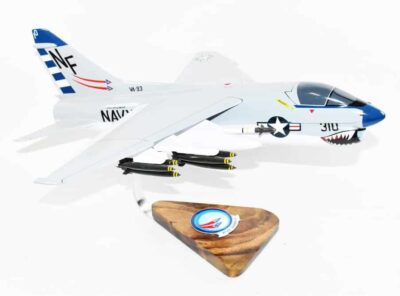 VA-93 Ravens (USS Midway 1977) A-7E Model Fly with the Ravens of VA-93 in this handcrafted A-7 model. Each piece is carved from wood and handpainted to provide a piece you’ll love. Length- 18 inches Made from Mahogany  US Veteran … Read More