May 1958: As part of an Atlantic Fleet training exercise (LANTRAEX 1-58), two of the squadron’s AD-6 Skyraiders, flown by Lieutenant (jg)s Strang and Woods, flew nonstop from USS Forrestal (CV-59), operating off the coast of Jacksonville, Florida, to Naval Air Station North Island. The flight was conducted below 1000 feet to demonstrate the low level and long range capability of the squadron. Two days later the aircraft returned, nonstop, to Forrestal.
5 Feb 1963: The squadron’s commanding officer, Commander C. H. Mundt, was killed in an air crash.
22 Dec 1965: The squadron’s commanding officer, Commander B. J. Cartwright, and his bombardier/navigator, Lieutenant Ed Gold, failed to return from a strike into North Vietnam and were listed as missing in action, presumed dead until their remains were identified in November 1994.[2] 21 Apr 1966: The squadron’s commanding officer, Commander J. E. Keller, and his bombardier/navigator, Lieutenant Commander E. E. Austin, were killed in action during a mission over North Vietnam.
27 Apr 1966: While serving with VA-85 as a bombardier/ navigator in an A-6A, Lieutenant (jg) Brian E. Westin was awarded the Navy Cross for heroism during a combat mission over North Vietnam when he risked his own life to save that of his wounded pilot, Lieutenant W. R. Westerman.
6 Sep 1968: The squadron’s commanding officer, Commander K. L. Coskey, was shot down over North Vietnam. His bombardier/navigator, Lieutenant Commander R. G. McKee, was rescued but Commander Coskey became a POW. He survived the internment at Hanoi and was released on 14 March 1973.
Jul 1974: Following the coup that overthrew the government of Cyprus, VA-85 operated from Forrestal in the vicinity of Cyprus and provided air cover for the evacuation of Americans and foreign nationals from the island.
May–Jun 1981: Following increased military action and Israeli reprisal raids against Syrian missile positions in southern Lebanon, Forrestal was ordered to the eastern Mediterranean. VA-85 operated from the carrier while on station off the coast of Lebanon.
Jul 1982: Following the Israeli invasion of Lebanon in June and the siege of west Beirut, Forrestal operated off the coast of Lebanon with VA-85 prepared to provide air support for a possible evacuation of Americans.
Aug–Sep 1982: Forrestal and its embarked squadrons provided air cover for the landing of 800 U.S. Marines in Beirut, Lebanon. The Marines became part of the Multinational Force in Lebanon.
4 Dec 1983: During USS John F. Kennedy (CV-67)’s operations off the coast of Lebanon in support of the Multinational Force, several of the carrier’s F-14 reconnaissance aircraft received hostile fire from Syrian surface- to-air missile and anti-aircraft positions on 3 December. A retaliatory strike was flown by elements of CVW-3 and aircraft from USS Independence (CV-62) against the Syrian antiaircraft positions near Hammana, Lebanon. One of the squadron’s A-6Es was lost in the attack, its pilot, Lieutenant Mark Lange, was killed and the NFO, Lieutenant Bobby Goodman, was captured by the Syrians. He was released 4 January 1985.
Jul 1984: The squadron operated in the Caribbean and off the coast of Central America to assist the Coast Guard with drug interdiction operations.
10 Oct 1985: The squadron’s KA-6D tanker aircraft refueled F-14s from USS Saratoga (CV-60) en route to their intercept of an Egyptian 737 airliner that was carrying Arab terrorists who had hijacked the Italian cruise ship Achille Lauro on 7 October and murdered an American citizen. The F-14s forced the airliner to land at Naval Air Station Sigonella, Sicily, leading to the capture of the terrorists.
24 Mar 1986: Libyan missiles were fired at U.S. Naval forces operating in the Gulf of Sidra. This action precipitated a retaliation against Libya by squadrons from Saratoga, USS America (CV-66) and USS Coral Sea (CV-43). VA-85’s A-6Es conducted a follow-up attack with Rockeye bombs on a Libyan Combattante II G-class fast attack missile craft that had been hit by a Harpoon missile fired by a VA-34 aircraft. The attack resulted in the sinking of the Combattante II. VA-85 aircraft also attacked a Nanuchka II class missile corvette with Rockeyes, damaging the corvette.
25 Mar 1986: VA-55 attacked a Nanuchka with Rockeyes, damaging but not stopping the corvette. A VA-85 aircraft then launched a Harpoon against the corvette which resulted in its sinking.
6 Sep 1989: Squadron aircraft flew missions in support of the evacuation of personnel from the American Embassy in Beirut, Lebanon, due to the unstable situation in that country.
17 Jan–28 Feb 1991: The squadron participated in Operation Desert Storm, combat strikes against targets in Iraq and the Kuwaiti theater of operations. During this period of combat the squadron flew 585 combat sorties, consisting of 1,700 flight hours and expended over 850 tons of ordnance.
Aug 1993: Squadron aircraft flew missions over Bosnia-Hercegovina in support of U. N. Operation Deny Flight.
Nov 1993: Squadron aircraft flew sorties over Mogadishu, Somalia, in support of U. N. Operation Continue Hope.
Dec 1993: Squadron aircraft provided support for reconnaissance missions over southern Iraq, part of Operation Southern Watch

Be the first to review “VA-85 Black Falcons Squadron Patch” 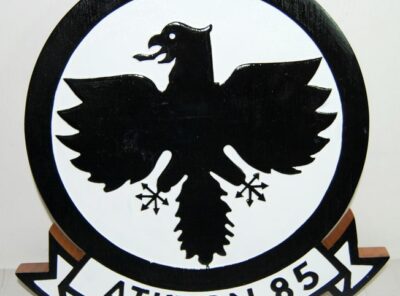 VA-85 Black Falcons Plaque A beautifully carved 14 inch solid wood plaque of the VA-85 Black Falcons!   Show your aviation lineage with truly artistic craftsmanship of the Navy’s finest symbols. The use of naval aviation insignia is a modern … Read More 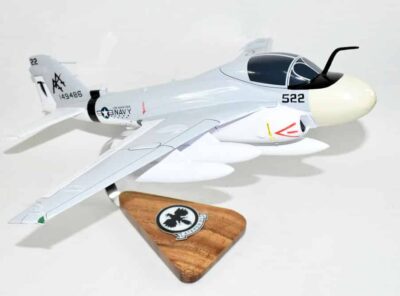 VA-85 Black Falcons KA-6D (USS Saratoga 1985) Model Fly with the VA-85 Black Falcons in this handcrafted KA-6D Model. Each piece is carved from wood and painted to provide a one of kind piece. Our pieces seek to recreate memories … Read More 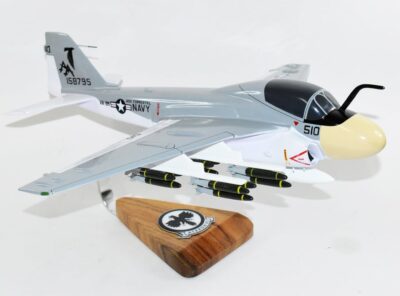 Fly off the USS Forrestal this 18 inch wooden model of the VA-85 Black Falcons A-6 Intruder.  Each model is carefully carved and painted by master craftsman.  This is perfect for the goat locker or office and will provide a perfect aid for aviator told stories! 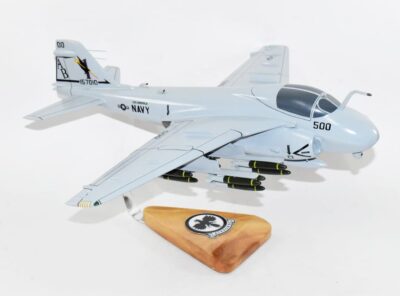 Proudly display this 18 inch wooden model of the VA-85 Black Falcons A-6 Intruder.  Each model is carefully carved and painted by master craftsman.  This is perfect for the goat locker or office and will provide a perfect aid for aviator told stories!