1970s
A VA-37 A-7A landing aboard USS Saratoga off Vietnam, in 1972.
In Sep 1970, VA-37 was embarked on USS Saratoga (CV-60) when fighting erupted between Palestinian forces and the Jordanian Army, and was directed to operate in the eastern Mediterranean in response to this crisis. On 29 Sep 1970, VA-37 participated in an air power demonstration for President Richard Nixon during his two-day visit to Saratoga while she steamed in the Med. From June to October 1971, VA-37 participated in the test and evaluation of the new CV concept during the Saratoga’s deployment to the North Atlantic and the Mediterranean Sea. The CV concept involved combining the capabilities of the attack and antisubmarine carriers (CVA and CVS) into a single ship.
The Bulls deployed twice to Yankee Station in support of combat operations during the Vietnam War. On 1 Aug 1972, a Bull A-7A Corsair II was used to establish a sonobuoy field in an anchorage area near the island of Hon Nieu, off the coast of North Vietnam – the first time an A-7 had ever been used to drop sonobuoys.
In 1973, the squadron received their first A-7E, a more advanced version of the plane. They made seven cruises with this plane in the 1970s and early 1980s, including responding to regional crises in the Mediterranean Sea and Indian Ocean.
1980s
On 4 January USS John F. Kennedy (CV-67), with VA-37 embarked as part of Carrier Air Wing Three (AC), deployed from Norfolk VA for a seven-month cruise that saw USS John F. Kennedy sail to the Arabian Sea via the Mediterranean Sea and Suez Canal. During this time port visits took place in St. Thomas, US Virgin Islands, and Malaga, Spain. During their time operating in the Arabian Sea VA-37 and USS John F. Kennedy conducted port visits at Perth, Australia and Mombasa, Kenya, before, in June 1982, USS John F. Kennedy (CV-67),took station off the coast of Lebanon after Israel invaded that country. After leaving the area another port visit took place in Toulon, France, before returning home on 14 July 1982

From 1 October 1982 VA-37 became part of Carrier Air Wing Fifteen (NL) and in January 1983 as part of CVW-15 they embarked on board the (then) newest carrier in the USN, USS Carl Vinson (CVN-70).
VA-37 headed to Naval Air Station Roosevelt Roads in Puerto Rico in August 1942 for exercises with the destroyer USS Mahan (DDG-42), which was the test platform for the development of the CG/SM-2 (ER) missile program project.
On 1 March VA-37 sailed with CVW-15 and USS Carl Vinson on an eight-month would cruise that saw them operate in the Mediterranean Sea, Atlantic Ocean, Indian Ocean, Arabian Sea, South China Sea, and Pacific Ocean in a multitude of exercises and with port visits in Monte Carlo, Monaco, Casablanca, Morocco, Abidjan, Ivory Coast, Perth, Australia, Subic Bay, Philippines, Hong Kong, Sasebo, Japan, Pusan, Republic of Korea, and Pearl Harbor, Hawaii, before returning to NAS Cecil Field in Florida on 29 October 1983.
In June 1984, the squadron’s primary mission was changed to close air support in preparation for its deployment to MCAS Iwakuni as part of the Marine Corps Unit Deployment Program. The deployment of the two Navy attack squadrons was designed to test the interoperability of the Marine Corps and Navy.
In December 1984, VA-37 deployed to MCAS Iwakuni and relieved VA-105. While deployed to Iwakuni, the squadron was detached to Yechon, Korea, to participate in exercise Team Spirit 85. This was the first time a Navy carrier-based squadron had deployed in field conditions since World War II.
In April 1988, VA-37 deployed with Carrier Air Wing Six (CVW-6) on board the USS Forrestal (CV-59) to the North Arabian Sea via the Suez Canal in support of America’s Earnest Will operations in the region. The squadron spent 108 consecutive days at sea before the USS Forrestal (CV-59) anchored at its first liberty port, Naples Italy.
1990s
VA-37 A-7E.
During the 90s, the Bulls deployed aboard USS John F. Kennedy (CV-67), USS Dwight D. Eisenhower (CVN-69), USS Theodore Roosevelt (CVN-71), and USS Enterprise (CVN-65).
Following the invasion of Kuwait in August 1990, several Bulls were deployed with VA-72 in support of Operation Desert Shield.
On October 31, 1990, the Bulls flew their last official sortie in the A-7E Corsair II. This ended a 25-year association with the “Harley of the Fleet” in which over 115,000 flight hours and 25,000 arrestments were flown. On 28 Nov 1990, VA-37 was redesignated VFA-37 and began flying the F/A-18 Hornet. From October 1992 to April 1993, the Bulls deployed to the Mediterranean Sea and were key participants in Operation Provide Comfort in northern Iraq and Operation Provide Promise in the airspace near the former Yugoslavia.
In 1994 the squadron flew missions over Iraq in support of Operation Southern Watch and later over Bosnia in support of Operation Deny Flight. The Bulls also participated in major exercises with the Kuwaitis, Saudis, and Israelis, as well as with many NATO allies.
In November 1996, the Bulls flew in support of Operation Southern Watch and Operation Deliberate Guard over Bosnia-Herzegovina.
The Bulls deployed again in November 1998. After four weeks of participating in OSW, the order was issued for Operation Desert Fox in Iraq. They also flew missions over the former Yugoslavia in Operation Deliberate Force.
The Bulls relocated from Naval Air Station Cecil Field, Florida, to NAS Oceana, Virginia in July 1999.
2000s
The next major deployment for the Bulls was the maiden voyage of the USS Harry S. Truman (CVN-75) in 2000.
A VFA-37 F/A-18C landing aboard USS Harry S. Truman in December 2013.
In December 2002 VFA-37 deployed for their second cruise aboard the Truman. On 19 March 2003, TEAM BULL participated in combat operations in Operation Iraqi Freedom (OIF). While flying from the eastern Mediterranean Sea, the Bulls participated in the “shock and awe” campaign in Southern Iraq before shifting focus to assisting U.S. Forces in Northern Iraq. By the end of a successful 30-day air campaign in OIF, the Bulls had flown 252 combat sorties over Iraq. The squadron returned to Virginia on Memorial Day 2003.

VFA-37 deployed to the Persian Gulf and flew combat missions in support of Iraqi Freedom again from October 2004 to April 2005 from Harry S. Truman. In the spring of 2006, VFA-37 transferred to Carrier Air Wing Eight for seven months to cover for VFA-213 as they transitioned to the F/A-18F.

The squadron deployed on Truman in November 2007 in support of Operation Iraqi Freedom, returning to Oceana on 4 June 2008. While deployed, they dropped a total of 10 t (22,000 lb) of ordnance. 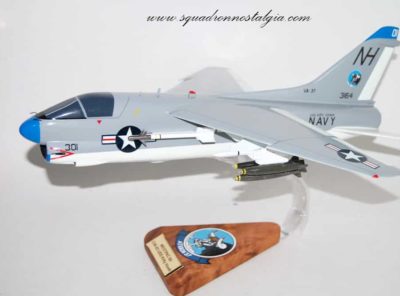 VA-37 Ragin’ Bulls A-7a (1969, #301) Model Fly again with the VA-37 Ragin’ Bulls in this wooden A-7a model which has been meticulously carved and painted to provide a beautiful piece of art for any space. Specifications: Length:  18 inches … Read More 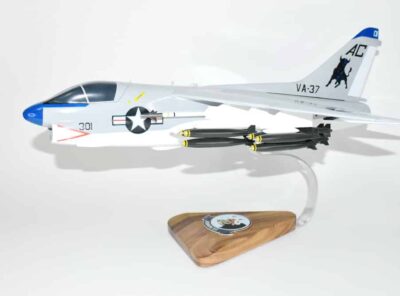 VA-37 Ragin’ Bulls A-7e (1980) Model Fly again with the VA-37 Ragin’ Bulls in this wooden A-7e model which has been meticulously carved and painted to provide a beautiful piece of art for any space. Model is 18 inches long. … Read More 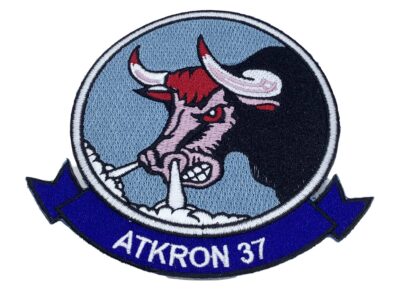 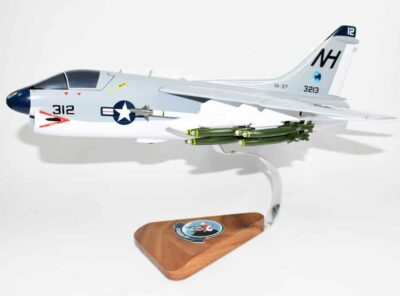 VA-37 Ragin’ Bulls A-7a (1969) Model Fly again with the VA-37 Ragin’ Bulls in this wooden A-7a model which has been meticulously carved and painted to provide a beautiful piece of art for any space. Specifications: Length:  18 inches Wingspan: … Read More 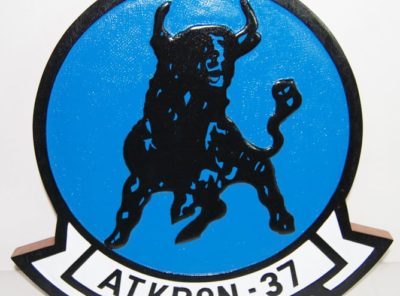 VA-37 Ragin’ Bulls Plaque A beautifully carved 14 inch solid wood plaque of the VA-37 Ragin’ Bulls!   Show your aviation lineage with truly artistic craftsmanship of the Navy’s finest symbols. The use of naval aviation insignia is a modern … Read More 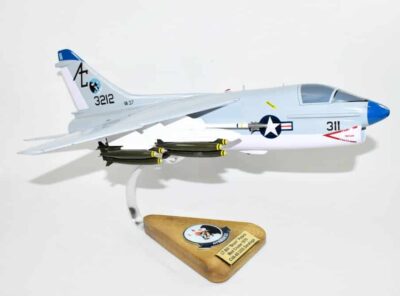 VA-37 Ragin’ Bulls A-7a (USS Saratoga 1970) Model Fly again with the VA-37 Ragin’ Bulls in this wooden A-7a model which has been meticulously carved and painted to provide a beautiful piece of art for any space. Specifications: Length:  18 … Read More