A beautifully carved 14 inch solid wood plaque of the VA-25 Fist of the Fleet!  Collect all your squadrons with truly artistic craftsmanship of the Navy’s finest symbols.

The use of naval aviation insignia is a modern form of heraldry that dates back to the early period of naval aviation in the 1920’s and captures many proud moments of its history. The practice fosters a sense of pride, unit cohesion and contributes to high morale, esprit de corps and professionalism within the community. It also serves as an effective means of preserving a command’s tradition, continuity of purpose and recognition, as traced through its lineage.

Where CDR Gorgon Sherwood, C.O. of VA – 65, hangs in the parachute harness from an a-frame erected on the hanger deck. With the help of the apparatus, he perfects the technique of getting out of the harness in the least possible time after landing. 1 August 1952 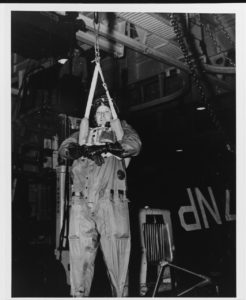