VA-205, nicknamed the Green Falcons, was an Attack Squadron of the U.S. Naval Reserve, based at Naval Air Station Atlanta, Georgia. It was established on 1 July 1970 and disestablished on 31 December 1994.

1 July 1970: VA-205, a reserve squadron, was established as part of a reorganization intended to increase the combat readiness of the Naval Air Reserve Force.
August 1971: The squadron conducted its two weeks of active duty training embarked on USS John F. Kennedy as part of CVWR-20. This was the first complete Reserve Carrier Air Wing deployment aboard a carrier.
May 1972: The squadron participated in exercise Exotic Dancer V, designed to test multi-service operations under a unified command organization.
4 September 1975: Squadron pilots began transition training with VA-125 in preparation for receiving the A-7 Corsair II.
6–16 July 1982: The squadron, along with other units of CVWR-20, participated in operations on USS Carl Vinson, with the emphasis on coordinated air wing operations.
10–23 May 1986: During an annual active duty deployment to NAS Fallon, the squadron participated in close air support training, air wing strike evolutions, and an excellent simulated two-day war exercise conducted by Strike University.
1 Oct 1993: The squadron assumed the additional mission (Fleet Support Readiness Group, FTRG) of providing electronic support to simulate missile attacks on surface ships for training purposes. This mission had previously been performed by VAQ-33 (Carrier Tactical Electronics Warfare Squadron 33). 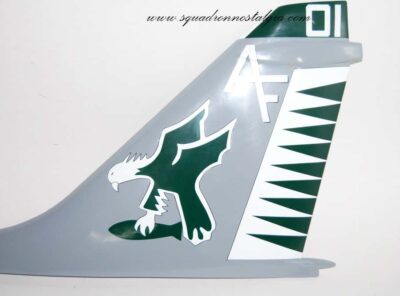 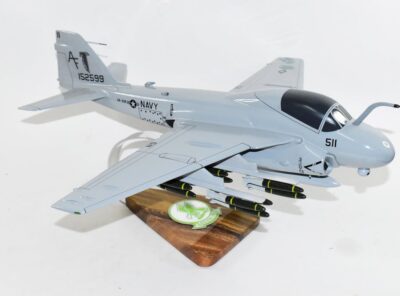 Proudly display this 18 inch wooden model of the VA-205 Green Falcons A-6 Intruder.  Each model is carefully carved and painted by master craftsman.  This is perfect for the goat locker or office and will provide a perfect aid for aviator told stories! 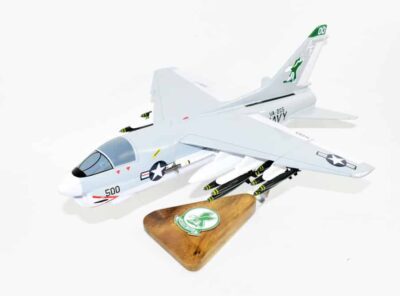 VA-205 Green Falcons (1972) A-7B Model Fly with the Green Falcons of VA-205 in this handcrafted A-7 model. Each piece is carved from wood and handpainted to provide a piece you’ll love. Specifications: Length:  18 inches Wingspan: 15 inches VA-205, … Read More