28 Jan 1949: Squadron aircraft, while secured to the flight deck and engines running, were used to assist in berthing USS Midway in Augusta, Sicily. This procedure is known as Operation Pinwheel.
23 Aug 1951: The squadron participated in its first combat sortie over Korea. This also marked the first use of the F2H-2 in combat.
25 Aug 1951: The squadron’s F2H-2 aircraft, along with F9Fs from VF-51, provided escort for 30 U.S. Air Force B-29 bombers raiding the marshalling yards at Rashin, North Korea.
Nov–Dec 1956: USS Franklin D. Roosevelt, with VA-172 embarked, was ordered to deploy and operate off the coast of Spain as a result of the Suez crisis.
Sep–Oct 1957: A detachment of squadron’s F2H-2 aircraft were embarked on USS Tarawa to provide fighter support for the antisubmarine warfare (ASW) carrier during a NATO exercise in the North Atlantic.
Nov 1961: VA-172, embarked on Roosevelt, operated off the coast of the Dominican Republic to support the newly established democratic government.
May 1963: Roosevelt, with VA-172 embarked, deployed to the Caribbean and operated off the coast of Haiti in response to a rebel attempt to overthrow the Haitian government.
Jul–Sep 1963: A detachment from the squadron was deployed aboard USS Randolph to provide fighter coverage for the ASW Task Group during operations in the Caribbean Sea.
8–29 Aug 1964: Roosevelt, with VA-172 embarked, was ordered to operate in the vicinity of Cyprus after fighting escalated between Turkish and Greek forces on the island.
Aug 1966: The squadron commenced combat operations in Vietnam. These were its first combat sorties since the Korean War in 1952.
2 Dec 1966: The squadron’s commanding officer, Commander Bruce A. Nystrom, was lost in a night reconnaissance mission over the Red River delta area in North Vietnam. 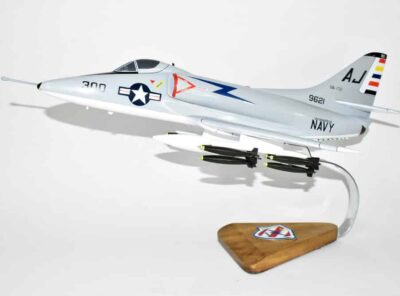