A squadron patch of the VA-127 Batmen with plastic backing.

On 1 Jun 1970, the squadron’s mission was modified when it was designated as the only A-4 Replacement Air Wing squadron in the Navy. The primary mission included fleet replacement pilot training, basic and refresher all weather jet instrument training and replacement enlisted training in both the TA-4 and A-4 model aircraft, plus the ancillary mission of providing jet transition training. The flight syllabus included weapons delivery (conventional and nuclear), airborne electronic countermeasures, field mirror landing practice, low level navigation, inflight aerial refueling, defensive tactics and carrier qualifications (day and night). In 1971, the squadron expanded its training on the A-4 to include personnel from the Argentine Navy; previously it had trained only U.S. naval aviators. That same year, it also began training pilots of the Singapore Air Defense Command. 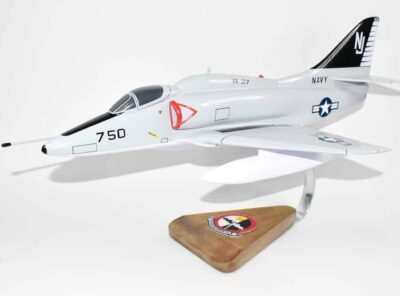 VA-127 Batmen A-4F Skyhawk Model Fly with the VA-127 Batmen in this handcarfted A-4F Skyhawk model.  Each piece is carved from wood and handpainted to provide a piece you’ll love. Length – 18 inches Operational history Prior to being established as … Read More