A 4 inch squadron patch of the VA-122 Flying Eagles

May 1950: The squadron was established with a mission of all-weather attack and anti-submarine warfare (ASW). The squadron trained detachments for carrier deployments and also participated in various exercises held on the West Coast.
9 November 1950 – 9 June 1951: VC-35 Detachment 3 was the squadron’s first detachment to deploy. It deployed to Korea and flew ASW patrols, night heckler missions, and other combat sorties. These became the standard missions for the squadron detachments that deployed to Korea.
29 June 1959: The squadron’s mission was changed from all-weather attack to fleet replacement training. It was responsible for instrument flight training for fleet propeller pilots, including ground school; enlisted ground training for AD Skyraider maintenance personnel; and the training of fleet replacement pilots for the AD-6/7 Skyraider.
June–August 1960: The squadron trained eight officers from the Republic of Vietnam Air Force in the operation of the AD Skyraider.
November 1966: With the acceptance of the A-7A Corsair II, the squadron took on the additional mission of fleet replacement training in this new aircraft.
1967: VA-147 was the first squadron to be trained in the A-7 by VA-122.
December 1969: The squadron joined with VA-125 to inaugurate a graduate level Light Attack Weapons School which involved three intensive weeks of classroom and flight syllabus training covering all phases of attack aviation.
15 October 1973: VA-122’s Weapons Training Center, which conducted the Light Attack Weapons School, became a separate command and was designated Light Attack Weapons School, Pacific.
30 June 1988: With the disestablishment of VA-174, the east coast Fleet Readiness Squadron for the A-7, VA-122 assumed the responsibility for A-7 training on both coasts.
May 1991: Prior to VA-122’s disestablishment, it had trained and graduated over 5,000 light attack pilots and over 55,000 highly skilled maintenance personnel during its career as a fleet replacement training squadron. 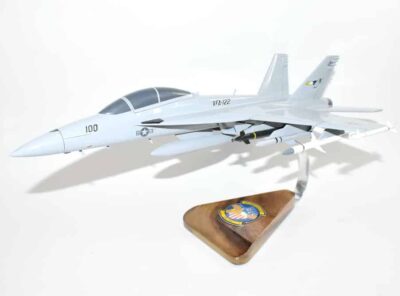 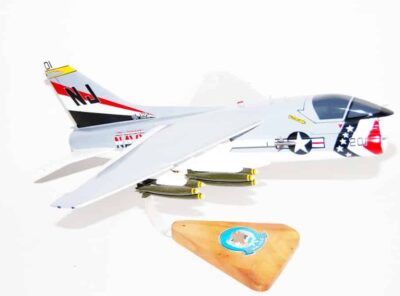 VA-122 Flying Eagles (1976) A-7E Fly with the Flying Eagles of VA-122 in this hand crafted A-7C with 1971 markings. Each model is carefully carved from wood and hand painted to provide a piece you’ll love. Specifications: Length:  18 inches … Read More 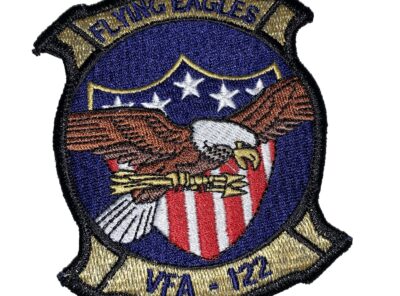