A 4″ squadron patch of the USS Worden CG-18 with hook and loop.

The fourth USS Worden (DLG/CG-18), a Leahy-class cruiser, was a ship of the United States Navy named in honor of Admiral John L. Worden. Originally called a “destroyer leader” or frigate, in 1975 she was redesignated a cruiser in the Navy’s ship reclassification. The ship entered service in 1963 and participated in the Vietnam War.

Following her commissioning, Worden spent a two-month fitting-out period at the Boston Naval Shipyard. The guided missile frigate departed Boston on 12 October, bound for Bermuda for shakedown training. She then proceeded to Hampton Roads and sailed from Norfolk, Virginia on 28 October for her home port, San Diego, California, arriving there on 13 November. Following a trip to Dabob Bay and Seattle, Washington for sonar measurements, Worden became the flagship of her squadron.[1]

In January 1964, Worden fired a series of missiles at the Pacific Missile Range for systems qualifications tests. She continued operations in the San Diego area until she entered the Long Beach Naval Shipyard in March for a post-shakedown availability which was completed in early May.[1]

From 18 May to 26 June, the ship participated in underway training at San Diego. Worden’s first fleet exercise took place from 10 to 17 July, a major anti-air warfare exercise. On 11 August 1964, the frigate sailed for the western Pacific for a Far East deployment. After refueling at Midway and Guam, the ship arrived in Subic Bay, Philippines, on 30 August and became an active participant in 7th Fleet activities. Worden visited Yokosuka, Japan, in late October and early November, then continued operations in Southeast Asia until the end of 1964.[1]

On New Year’s Day, 1965, Worden entered the port of Hong Kong for a period of rest and recreation. After a brief visit to Yokosuka, Japan, the frigate set course for the United States on 24 January. The ship arrived at her home port on 17 February and remained in port through 5 March when the ship commenced a three-month restricted availability at the Long Beach Naval Shipyard.[1]

On 2 June 1965, Worden returned to San Diego for evaluation of a newly installed radar system. She continued to operate in her home port area and participated in Fleet Exercise “Range Bush” off the coast of southern California during the period 18 through 24 November 1965. She ended the year making preparations for deployment to the western Pacific.

The frigate departed her home port on 7 January 1966 for Subic Bay, Philippines, via Pearl Harbor and Guam. She arrived at the Philippines on 30 January and, the following day, set course for the Gulf of Tonkin and operations with the 7th Fleet. On 4 February, Worden assumed “Tomcat” duties west of Hainan Island. After an eight-day visit to Sasebo, Japan, Worden departed on 1 March and returned to the Gulf of Tonkin to assume plane-guard duties for the aircraft carrier Ranger.[1]

On 19 March, the frigate received a helicopter detachment on board; and, the following day, a rescue helicopter from Worden pulled a downed F-4 Phantom pilot from the water three miles from the beach. Another such rescue was effected on 23 May. Worden conducted operations in the Gulf of Tonkin until 17 June when she completed her commitment and proceeded to Yokosuka, Japan, for a short upkeep period prior to the return trip to California.[1]

The frigate arrived at San Diego, on 10 July. During the period 11 September to 21 October, the ship fired a series of missiles at the Pacific Missile Range, as part of a missile test project. As of 31 December 1966, Worden was moored at Naval Station San Diego, preparing for future operations involving the project.[1]

January 1967 was spent providing services for continued missile tests, and the frigate remained in port during February, training and preparing for an upcoming deployment. On 13 March, Worden took part in the second “Comtuex” of the year, then returned to San Diego.[1]

Worden began a six-month deployment to the western Pacific on 8 April when she sailed for Japan via Pearl Harbor. On 26 April, the frigate arrived at Yokosuka, Japan. May began with Worden en route to Subic Bay via the Okinawa missile range. On 14 May, the ship reached Danang, South Vietnam, and served on a search and rescue station until mid-September with intermittent periods of upkeep and liberty at Subic Bay, Hong Kong, Sasebo, and Yokosuka. During a visit to Hong Kong on 13 August, a Greek freighter lost control and rammed Worden on the starboard side inflicting minor damage. As the frigate departed Hong Kong for Subic Bay, she sighted and rescued a dugout canoe with three Philippine nationals who had been adrift for three days.[1]

On 14 September 1967, Worden departed the search and rescue station the last time for Yokosuka via Subic Bay. The ship departed Japan on 23 September for Pearl Harbor, thence to San Diego, arriving on 6 October. Worden remained in port until 16 November when she conducted local operations and type training. With the exception of a dependent’s cruise and an off-load of ammunition at Seal Beach, Worden remained in port at San Diego for the month of December and thus ended the year.[1]

The early days of 1968 found Worden at San Diego, completing plans and preparations for yard overhaul, her first since commissioning. On 9 January, the frigate sailed to the San Francisco Bay Naval Shipyard where she entered drydock. The major shipyard jobs were completed toward the middle of April. On 6 May, the ship began sea trials, and the overhaul was officially completed on 13 May 1968.[1]

Upon returning to San Diego two days later, Worden conducted various exercises and evaluations in preparation for an upcoming western Pacific deployment. On 1 July, the frigate commenced six weeks of refresher training. The ship spent the month of September conducting missile firings and antisubmarine warfare exercises. During the period 1 to 10 October, Worden joined in Exercise “Beat Cadence”, a simulation of the Tonkin Gulf task organization.[1]

After a brief tender availability, Worden departed San Diego en route to Subic Bay, Philippines, via Pearl Harbor, arriving on 22 November. Three days later, the ship departed Subic Bay and became involved in a search and rescue (SAR) incident when a helicopter with nine Navy men on board ditched in the approach to the harbor. All of the men were rescued, and the helicopter was towed by boat to a nearby beach.

Worden then steamed to Danang, South Vietnam, for SAR briefings and anti-PT boat exercises before assuming duties as commander of the task unit at the northern SAR station. The frigate shifted to the southern SAR station on 5 December and remained on station without incident until 29 December when USS Coontz relieved the ship. Worden then proceeded to Kaohsiung, Taiwan, for an overnight logistics stop en route to Sasebo, Japan, for repairs.[1]

The New Year, 1969, found Worden en route to Sasebo, Japan. After stopping at Keelung, Taiwan; and Subic Bay, Philippines; the ship returned to the northern SAR station, Danang, South Vietnam, on 25 January 1969. She remained on station through 18 February when she departed for Subic Bay; then to Singapore and Hong Kong. The frigate returned to her station on 14 March for a week of service before departing the last time for Subic Bay, arriving on 23 March. For the remainder of the month, she conducted task group operations.[1]

Worden returned to Subic Bay on 4 April, then began a cruise which took her to Sydney (14 to 21 April); Wellington, New Zealand (25 to 27 April); and Pago Pago, American Samoa (1 May). The ship arrived at San Diego, on 8 June and conducted a Secretary of the Navy guest cruise and a material inspection through 30 June.[1]

The frigate conducted local operations throughout July and August. On 22 September, she set sail for Acapulco, then transited the Panama Canal. Worden’s ultimate destination was Bath, Maine, where, on 10 November 1969, she was decommissioned at Bath Iron Works. 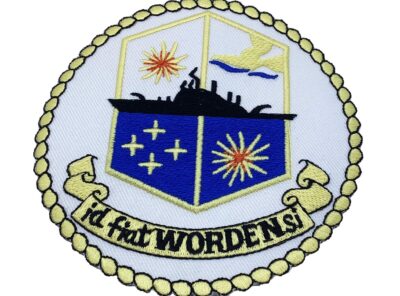