USS Topeka (SSN-754) is a Los Angeles-class submarine and the third United States Navy vessel to be named for Topeka, Kansas. The contract to build her was awarded to the Electric Boat Division of General Dynamics Corporation in Groton, Connecticut on 28 November 1983 and her keel was laid down on 13 May 1986. She was launched on 23 January 1988, sponsored by Elizabeth Dole, and commissioned on 21 October 1989.

History
During New Year’s Eve 2000, Topeka straddled the international dateline, thus was famously “in two millenniums at once”.

In December 2012, the submarine began an overhaul at Portsmouth Naval Shipyard. Earlier that same year, she completed a six-month-long deployment in the Western Pacific, covering around 35,000 nautical miles.

In May 2015, after miscellaneous repairs at Pearl Harbor Naval Shipyard, Topeka shifted homeport to Naval Base Guam as part of the U.S. Navy’s rebalance of force into the Pacific. 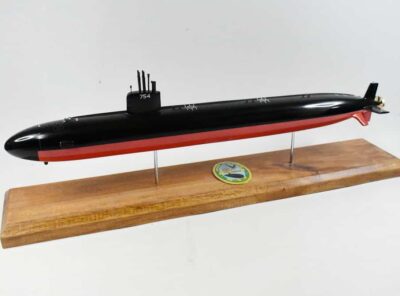 USS Topeka SSN-754 Submarine Model Sail again with the crew of the USS Sunfish SSN-649 in this handcrafted wooden submarine model. Each piece is carved from wood and handpainted to provide a piece you’ll love. Length – 20 inches Made … Read More 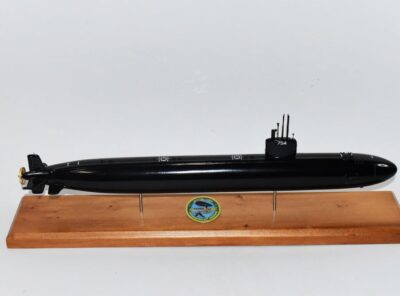 Sail again with the crew of the USS Sunfish SSN-649 in this handcrafted wooden submarine model. Each piece is carved from wood and handpainted to provide a piece you’ll love.