Dive with the USS Toledo SSN-769 again in this handcrafted 20-inch submarine. Each piece is carved from wood and handpainted to provide a piece you’ll love.

USS Toledo (SSN-769), is a United States Navy, Los Angeles-class nuclear powered attack submarine and the third U.S. Naval vessel to be named for the city of Toledo, Ohio. The contract to build her was awarded to Newport News Shipbuilding and Dry Dock Company in Newport News, Virginia on 10 June 1988 and her keel was laid down on 6 May 1991. She was launched on 28 August 1993, sponsored by Mrs. Sabra Smith, and commissioned on 24 February 1995.

This section needs additional citations for verification. Please help improve this article by adding citations to reliable sources. Unsourced material may be challenged and removed. (January 2018) (Learn how and when to remove this template message)
Her first deployment was to the Mediterranean with the George Washington Carrier Strike Group in 1997-1998, followed by a six month tour of the North Atlantic.

Kursk incident
Further information: Kursk submarine disaster
In August 2000, during naval exercises, the Russian submarine Kursk suffered a catastrophic incident. It was reported that the US Navy had submarines in the area, including Toledo, observing the exercises. French filmmaker Jean-Michel Carré, in Kursk: A Submarine in Troubled Waters,[2] which aired on 7 January 2005 on French TV channel France 2, alleged that Kursk sank because of a sequence of events triggered by a collision with Toledo. According to Carré, Kursk was performing tests with VA-111 Shkval torpedoes and the tests were being observed by two US submarines on duty in the region, Toledo and Memphis.

Toledo deployed to the Mediterranean again in late 2001-early 2002 in support of Operation Enduring Freedom.[1]

Toledo returned to the Naval Submarine Base New London in mid-April 2003 after having taken part in Operation Iraqi Freedom.

On 7 December 2004, Toledo returned to Groton, Connecticut, after a six-month deployment in the Persian Gulf with the John F. Kennedy Carrier Strike Group that included port calls in Crete, Dubai, and Bahrain. Her route home from Bahrain was unusual, rounding the Cape of Good Hope rather than using the Suez Canal. Once back in the North Atlantic, she was diverted for a classified drug interdiction mission with the Joint Interagency Task Force–South in the Caribbean Sea.

On 31 January 2006, Toledo again departed for a six-month deployment to CENTCOM. Port calls included Augusta Bay, Sicily, Dubai, the British Indian Ocean Territory of Diego Garcia and La Maddalena. She returned from this deployment on 31 July 2006.

In July 2009 two hull cracks, including one in her pressure hull, were discovered during a routine inspection. Although the Navy and Northrop Grumman launched two investigations into welding practices at the yard while Toledo was under maintenance, the cracks do not appear to be related to welds.

Return to service
Toledo left for another six-month deployment on 23 July 2010. In December 2010 she made a port call in Haifa. Commander Reckamp was received by the Haifa City Mayor Yona Yahav in the City Hall as is customary for visiting commanders of warships making port calls in Haifa.

On 20 January 2011, Toledo returned to Groton, Connecticut after a six-month deployment that included port calls in Cyprus, Bahrain, and Haifa. 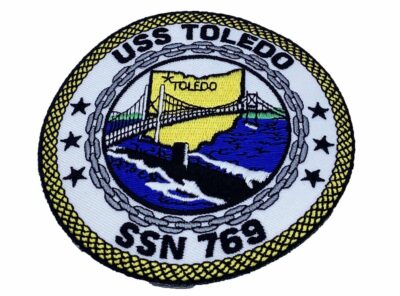 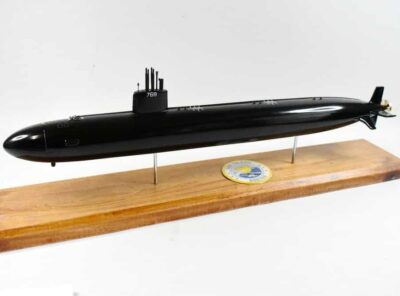