This is a 4″ patch with Plastic Backing of the USS Texas SSN-775.

USS Texas (SSN-775) is a Virginia-class submarine, and the fourth warship of the United States Navy to be named after the U.S. state of Texas.

Ship’s crest
“In the forefront is a full view of Texas, ready to go forth and take the fight to the enemy. Emblazoned on her hull is the shape of the state of Texas, denoting the outstanding patriotism and leadership the citizens of Texas have contributed to the American nation. Located within the state outline is a symbol of the atom, representing the warfighting capability and endurance afforded Texas by nuclear power.

Texas is backed by the traditional badge of the Texas Rangers. This identifies the singularity of purpose between the men and women who enforce Texas law and the sailors. The four white stars represent the four American warships to bear the name of the state of Texas. “Don’t Mess with Texas” is a well known state slogan and a warning for those who attempt to prevent Texas from carrying out her mission. The battle scarred Lone Star flag flying behind Texas represents the gallant heroism of those who fought and died at the Alamo to ensure the future of Texas, and it also represents the perseverance with which Texas and her crew will endure through all missions that are put before her. 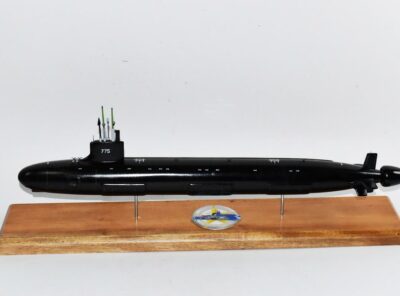 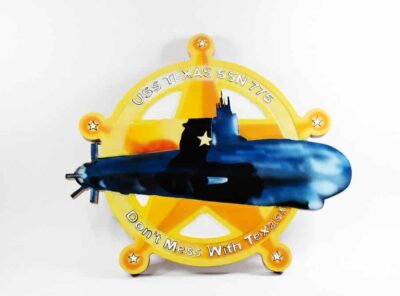 SSN-775 USS Texas Plaque A hand-crafted 14-inch plaque of the SSN-775 USS Texas . Each plaque is carved from Mahogany and hand painted to provide a piece you’ll love! USS Texas (SSN-775) is a Virginia-class submarine, and the fourth warship … Read More