95 in stock (can be backordered)

USS Pasadena (SSN-752), a Los Angeles-class submarine, was the third ship of the United States Navy to be named for Pasadena, California.

Pasadena provides the Fleet Commander or Task Force Commander a multi-mission platform. This vessel has unlimited endurance due to the nuclear propulsion plant, advanced sonar, torpedo, cruise missile, and mine delivery systems, a combination of speed and stealth due to quieting and the capacity to fulfill numerous missions.

History
The contract to build her was awarded to the Electric Boat Division of General Dynamics Corporation in Groton, Connecticut, on 30 November 1982 and her keel was laid down on 20 December 1985. She was launched on 12 September 1987 sponsored by Mrs. Pauline Trost, and commissioned on 11 February 1989 with Commander W. Fritchman in command.

In July 1991, Pasadena became the first Improved 688 Class submarine to deploy, commencing a six-month Western Pacific deployment. In June 1993, she commenced a six-month Western Pacific deployment to the Persian Gulf. While deployed, Pasadena participated in several exercises with the Royal Saudi, Omani and Australian Navies, and was the first United States SSN to conduct exercises with the Indian Navy in MALABAR Naval Exercise.[1] She also became the first nuclear-powered submarine to visit the port of Jeddah, Saudi Arabia on the Red Sea.

In March 1995, Pasadena again deployed on a six-month Western Pacific Deployment. While deployed to the Persian Gulf she became the first nuclear-powered submarine to visit the port of Muscat, Oman; the first to operate continuously inside the Persian Gulf; and the first SSN to be assigned to Commander, U.S. Fifth Fleet.

In April 1996, Pasadena changed homeports to Pearl Harbor, Hawaii, where she was assigned to Commander, Submarine Squadron Seven. From June 1996 to September 1996, Pasadena underwent a Selected Restricted Availability (SRA) where she was outfitted with improved offensive and defensive weapon systems. In April 1997, Pasadena deployed to the Eastern Pacific for a four-month deployment in support of UNITAS.

In January 2005, she participated in Operation Unified Assistance.

From September 2011 until late 2013, Pasadena was refitted at the Portsmouth Naval Shipyard.[3] Her sonar, fire-control system, and navigation equipment were upgraded. Following the update, Pasadena joined her new posting, Submarine Squadron 11 in San Diego, in November 2013.[4] 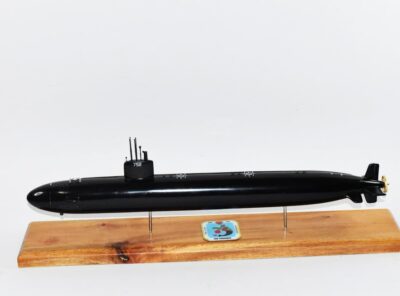 Sail again with the crew of the USS Pasadena SSN-752 in this handcrafted wooden submarine model. Each piece is carved from wood and handpainted to provide a piece you’ll love.