USS Nathanael Greene (SSBN-636), a James Madison-class fleet ballistic missile submarine, was the third ship of the United States Navy to be named for Major General Nathanael Greene (1746–1782), who served in the Continental Army during the American Revolutionary War.

Construction and commissioning
Nathanael Greene’s keel was laid down on 21 May 1962 at the Portsmouth Naval Shipyard in Kittery, Maine. The construction of the ship was supervised by Commander Lawrence Dennis Ballou. She was launched on 12 May 1964, sponsored by Mrs. Neander W. Wade, a descendant of Nathanael Greene, and commissioned on 19 December 1964 with Commander Robert E. Crispin in command of the Blue Crew and Commander William M. Cossaboom in command of the Gold Crew.

Service history
Nathanael Greene departed Portsmouth for shakedown on 30 December 1964, with her Gold Crew embarked; it was relieved on 1 February 1965 by the Blue Crew. Her shakedown period was followed by repairs and alterations at Portsmouth Naval Shipyard, after which the submarine, with her Blue Crew embarked, departed the shipyard for ballistic missile loading and her initial Polaris missile deterrent patrol.

In 1970-1971 Nathanael Greene was refueled and received its conversion to launch Poseidon missiles at Newport News Shipbuilding. Following Yard period and Shakedown, the Greene proceeded to Cape Canaveral for a test missile launch. In March 1972 the Greene departed for her first deterrent patrol following conversion ending up in Holy Loch, Scotland.

In 3 November 1974 Nathanael Greene during departure from Holy Loch was collided with soviet K-306 submarine of Victor-I class.[1] CIA sources claimed that it was James Madison,[2] not Greene.

History needed for 1965-1986.
Grounding and deactivation
On 13 March 1986 Nathanael Greene ran aground in the Irish Sea, suffering severe damage to her rudder and ballast tanks. Her grounding was the first serious accident involving a U.S. Navy nuclear-powered ballistic missile submarine. She was deactivated while still in commission in May 1987. Her early deactivation was decided both as a result of the damage sustained in the accident as well as in accordance with the limitations set by the SALT II treaty.

Nathanael Greene was decommissioned on 15 December 1986 and stricken from the Naval Vessel Register on 31 January 1987. Her removal from service allowed the United States to comply easily with the ballistic missile limits of the SALT II strategic arms limitation treaty.[citation needed]

Nathanael Greene entered the U.S. Navy’s Nuclear-Powered Ship and Submarine Recycling Program at Bremerton, Washington, on 1 September 1998. Her scrapping was completed on 20 October 2000.

Nathanael Greene’s sail has been restored and is now on display in Port Canaveral, Florida as a memorial to the original 41 for Freedom fleet ballistic missile submarines. 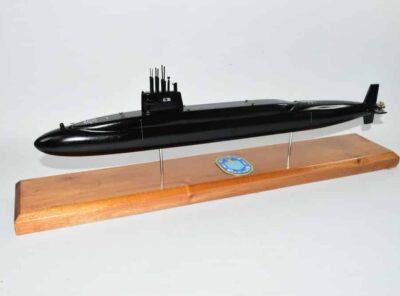