USS Miami (SSN-755) was a United States Navy Los Angeles-class attack submarine. She was the third vessel of the U.S. Navy to be named after Miami, Florida. Miami was the forty-fourth Los Angeles-class (688) submarine and the fifth Improved Los Angeles-class (688I) submarine to be built and commissioned. The contract to build her was awarded to the Electric Boat division of General Dynamics Corporation in Groton, Connecticut, on 28 November 1983 and her keel was laid down on 24 October 1986. She was launched on 12 November 1988 and commissioned on 30 June 1990 with Commander Thomas W. Mader in command.

On 1 March 2012, Miami pulled into the Portsmouth Naval Shipyard in Kittery, Maine, for a scheduled 20-month Engineered Overhaul (EOH) and system upgrades. On 23 May, a shipyard employee started a fire that spread to crew living, command and control, and torpedo spaces. Repairs were initially estimated to require three years and $450 million, a figure that was later revised to a range of $450 million to $700 million.

On 6 August 2013, Navy officials said that due to budget cuts the vessel would not be repaired. The submarine was placed on the inactive list,[1] then decommissioned on 28 March 2014.

At 5:41 p.m. EDT on 23 May 2012, fire crews were called with a report of a fire on Miami while being overhauled at the Portsmouth Naval Shipyard in Kittery, Maine. At the time, the submarine was on a scheduled 20-month maintenance cycle, indicating that she was undergoing an extensive overhaul called an “Engineering Overhaul”.[6] The national media reported that seven firefighters had been injured. One crew member suffered broken ribs when he fell through a hole left by removed deck plates during the fire. It took firefighters 12 hours to extinguish it.

Originally, the U.S. Navy reported that the fire started when an industrial vacuum cleaner used “to clean worksites on the sub after shipyard workers’ shifts” sucked up a heat source that ignited debris inside the vacuum. On 23 July 2012, however, civilian painter and sandblaster Casey J. Fury was indicted on two counts of arson after confessing to starting the fire. Fury admitted to setting it by igniting some rags on the top bunk of a bunk room. He claimed to have started it in order to get out of work early. On 15 March 2013, he was sentenced to more than 17 years in federal prison and ordered to pay $400 million in restitution.

The debate over whether to repair or scrap the submarine lasted more than a year. Within a month of the fire, Maine Senators Susan Collins and Olympia Snowe advocated repairing her.[15] In July 2012, Navy leaders asked Congress to add $220 million to the operations and maintenance budget for emergent and unfunded ship repairs to help repair Miami.[16] In August, the Navy decided to repair the boat for an estimated total cost of $450 million. The repair cost was expected to be trimmed by using spare parts from the recently decommissioned USS Memphis[18] and by repairing rather than replacing damaged hull sections, as had been done with another Los Angeles-class boat, San Francisco. But both of these approaches proved unworkable with the newer Miami. As well, a detailed assessment raised the estimated repair bill to $700 million.

On 6 August 2013, the U.S. Navy announced its intention to decommission Miami, concluding the cost was more than it could afford in a time of budget cuts. The sub was officially decommissioned on 28 March 2014, to be disposed of via the nuclear Ship-Submarine Recycling Program.

Previous mottos
“Can do, will do, glad to.” This motto was used prior to Operation Desert Fox.
“First to fire. Twice to fire.” This motto was adopted after returning to home port after the 1998-1999 deployment.
In popular culture
USS Miami is one of two vessels featured in Submarine: A Guided Tour Inside a Nuclear Warship, a 1993 non-fiction book by Tom Clancy.
In 1999, the ship was featured in The Learning Channel’s Extreme Machines on “Nuclear Submarines”. In that episode, it is also depicted in a fictional scenario in which it sinks a Typhoon Class Submarine but is able to escape an Akula Class Submarine without harm.
October 8, 1999 Andy Rooney, of 60 minutes, reported on his experiences after partaking in a day-long cruise aboard the Miami.
In 2012, Miami was featured in the novel “Hunter Killer” (previously published as “Firing Point”) by George Wallace and Don Keith. 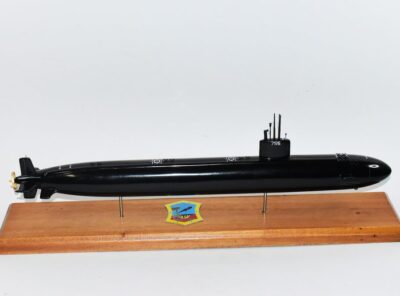 Sail again with the crew of the USS Miami SSN-755 in this handcrafted wooden submarine model. Each piece is carved from wood and handpainted to provide a piece you’ll love.