92 in stock (can be backordered)

USS John C. Calhoun (SSBN-630), a James Madison-class fleet ballistic missile submarine, was the only ship of the United States Navy to be named for John C. Calhoun (1782–1850), the Democratic legislator and statesman.

Construction and commissioning
The contract to build John C. Calhoun was awarded to Newport News Shipbuilding and Dry Dock Company in Newport News, Virginia, on 20 July 1961 and her keel was laid down there on 4 June 1962. She was launched on 22 June 1963 sponsored by Miss Rosalie J. Calhoun, and commissioned on 15 September 1964, with Commander Deane L. Axene in command of the Blue Crew and Commander Frank A. Thurtell in command of the Gold Crew.

History from 1965 to 1994 needed.
From 1979 to 1982, John C. Calhoun received upgrades necessary to enable her to carry the new Trident I ballistic missiles. 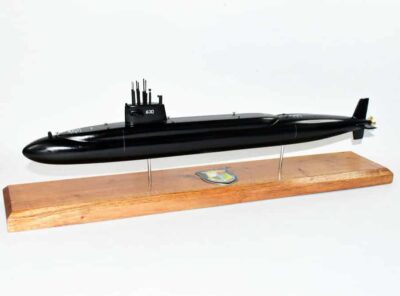