USS Coral Sea (CV/CVB/CVA-43), a Midway-class aircraft carrier, was the third ship of the United States Navy to be named for the Battle of the Coral Sea. She earned the affectionate nickname “Ageless Warrior” through her long career. Initially classified as an aircraft carrier with hull classification symbol CV-43, the contract to build the ship was awarded to Newport News Shipbuilding of Newport News, Virginia on 14 June 1943. She was reclassified as a “Large Aircraft Carrier” with hull classification symbol CVB-43 on 15 July 1943. Her keel was laid down on 10 July 1944 in Shipway 10. She was launched on 2 April 1946 sponsored by Mrs. Thomas C. Kinkaid and commissioned on 1 October 1947 with Captain A.P. Storrs III in command.

Before 8 May 1945, the aircraft carrier CVB-42 had been known as USS Coral Sea; after that date, CVB-42 was renamed in honor of Franklin D. Roosevelt, the late President, and CVB-43 was named the Coral Sea. 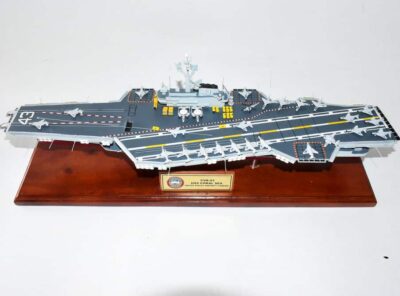 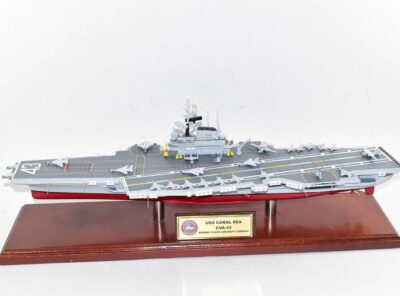