A 4″ with Plastic Backing/Sew On Squadron Patch of the USS Carl Vinson 2021-22 Cruise.

A 4″ with Plastic Backing/Sew On Squadron Patch of the USS Carl Vinson 2021-22 Cruise.

USS Carl Vinson (CVN-70) is the United States Navy’s third Nimitz-class supercarrier. She is named for Carl Vinson, a Congressman from Georgia, in recognition of his contributions to the U.S. Navy. The ship was launched in 1980, undertook her maiden voyage in 1983, and underwent refueling and overhaul between 2005 and 2009.

Besides deployments in Operation Desert Strike, Operation Iraqi Freedom, Operation Southern Watch, and Operation Enduring Freedom, Carl Vinson was involved in a number of notable events. The body of Osama bin Laden was buried at sea in 2011 from the deck of Carl Vinson, and that same year, on Veterans Day, she played host to the first NCAA basketball game on an aircraft carrier, between North Carolina and Michigan State.

A member of the United States House of Representatives for 50 years, Carl Vinson was, for 29 years, the Chairman of the House Naval Affairs and Armed Services Committee; Vinson was the principal sponsor of the so-called “Vinson Acts”, culminating in the Two-Ocean Navy Act of 1940, which provided for the massive naval shipbuilding effort in World War II.

Ship seal
The seal of USS Carl Vinson shows an eagle, wings spread and talons extended, carrying a banner in its beak. The eagle is emblematic of the nation and the ship’s motto, and also represents the power that resides in the ship’s aircraft. The eagle flies in the form of a stylized letter “V,” the initial of the ship’s namesake, Congressman Carl Vinson. The “V” also represents the ship’s hull when viewed bow-on. Inscribed on the banner that the eagle carries is the Latin phrase “Vis Per Mare” which means “Strength through the Sea”.[6]

Carrier Strike Group One
In October 2009, the US Navy announced that Carl Vinson would be the flagship of the newly established Carrier Strike Group One (CSG1), based in San Diego.[7] The ship, under the command of then Captain Bruce H. Lindsey, departed Norfolk for San Diego on 12 January 2010. Accompanying the carrier was Carrier Air Wing Seventeen, Destroyer Squadron 1 and the guided missile cruiser Bunker Hill.

Design and construction
Main article: Nimitz-class aircraft carrier
The keel was laid at Newport News Shipbuilding on 11 October 1975, and on 15 March 1980 the ship was launched/christened. Congressman Carl Vinson became the first person in the history of the United States Navy to witness a ship’s launching in his honor.[citation needed] After builder sea trials, she was delivered to the Navy on 26 February 1982. 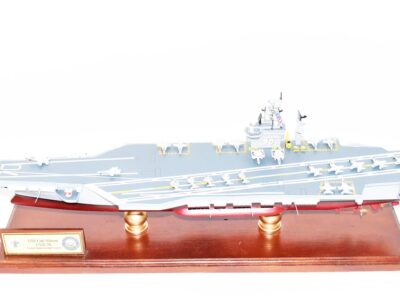 Fly off of the USS Carl Vinson CVN-70 Nimitz Class Carrier Model in this handcrafted wooden model. Each model is carved from wood and handcrafted to provide a piece you’ll love. 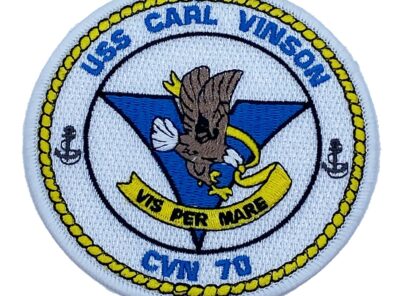 A 4″ with Plastic Backing Squadron Patch of the USS Carl Vinson CVN-70. 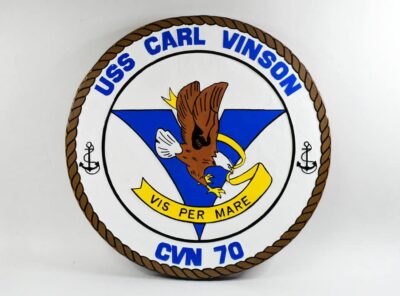