A 4″ with Plastic Backing Squadron Patch of the USS Boxer CVA-21.

A 4″ with Plastic Backing Squadron Patch of the USS Boxer CVA-21.

USS Boxer (CV/CVA/CVS-21, LPH-4) was one of 24 Essex-class aircraft carriers of the United States Navy, and the fifth ship to be named for HMS Boxer. She was launched on 14 December 1944 and christened by the daughter of a US Senator from LA.

Commissioned too late to see any combat in World War II, Boxer spent much of her career in the Pacific Ocean seeing 10 tours in the western Pacific. Her initial duties involved mostly training and exercises, including launching the first carrier-based jet aircraft, but demobilization prevented much activity in the late 1940s. At the outbreak of the Korean War, she was used as an aircraft transport before arriving off Korean waters as the third U.S. carrier to join the force. She supported the Inchon landings and subsequent invasion of North Korea, and was among the ships that provided support during the Chinese counteroffensive against an under-prepared and spread out United Nations (UN) force. She saw three subsequent combat tours in Korea conducting close air support and strategic bombing in support of UN ground troops fighting along the 38th parallel, as the battles lines had largely solidified by this time. She was awarded eight battle stars for her service in Korea.

After the Korean War, Boxer saw a variety of duties, including as an anti-submarine warfare carrier and an amphibious assault platform. She participated in a number of training exercises including Operation Hardtack and Operation Steel Pike, as well as several contingencies including Operation Powerpack and the Cuban Missile Crisis. In her later years, she served as a pickup ship for spacecraft during the Apollo program as well as an aircraft transport to troops during the Vietnam War.

Although she was extensively modified internally as part of her conversion to a Landing Platform Helicopter (LPH), external modifications were minor, so throughout her career Boxer retained the classic appearance of a World War II Essex-class ship. She was decommissioned on 1 December 1969 after 25 years of service and sold for scrap. 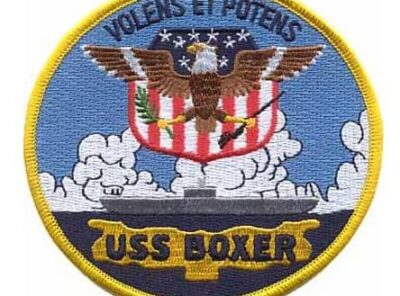 USS Boxer Squadron Patch – Sew On A squadron patch of the USS Boxer with plastic backing USS Boxer (LHD-4) is a Wasp-class amphibious assault ship of the United States Navy.[2] She is the sixth U.S. ship to bear the … Read More 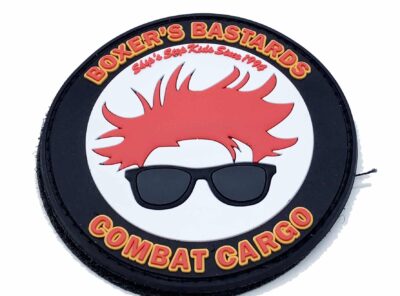