96 in stock (can be backordered)

USS Albany (SSN-753), a Los Angeles-class submarine, was the fifth ship of the United States Navy to be named for Albany, New York. The contract to build her was awarded to Newport News Shipbuilding and Dry Dock Company in Newport News, Virginia on 29 November 1983 and her keel was laid down on 22 April 1985. She was launched on 13 June 1987 sponsored by Nancy M. Kissinger, wife of Henry Kissinger, and was commissioned on 7 April 1990 with Commander Darl R. Anderson in command.

Albany was the last US submarine built via the traditional “keel up” ship construction method.[citation needed] Thus, it was the last submarine to “launch” down the shipway.

Albany and USS Topeka, differ from other members of the Los Angeles class as their pressure hulls were partially manufactured using stronger HY-100 steel rather than the HY-80 steel used in the manufacturing of all other Los Angeles-class submarines. This was done to test construction methods using this steel, which would later be employed in the assembly of the new Seawolf-class submarines.

On 30 July 2004 Albany returned to Norfolk, Virginia, after a six-month deployment that began in the Persian Gulf and Gulf of Oman, then proceeded to the Mediterranean Sea for a NATO exercise, Operation “MEDSHARK/Majestic Eagle. 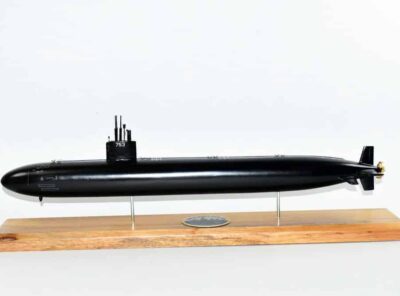