A hand crafted 14 inch plaque of the SSN-788 USS Colorado. Each plaque is carved from Mahogany and hand painted to provide a piece you’ll love!

USS Colorado (SSN-788) is a nuclear powered United States Navy Virginia-class attack submarine, named for the State of Colorado. She is the fifteenth of her class and fifth of the significantly redesigned Block III, including a revised bow and VLS technology from the Ohio class of guided missile submarines. She was constructed by Huntington Ingalls Industries in partnership with the Electric Boat division of General Dynamics in Newport News, Virginia, with the initial contract awarded on 22 December 2008.

The official naming ceremony was on 25 June 2012. Her keel was laid down on 7 March 2015 and she was christened and launched on 3 December 2016. Her sponsor is Annie Mabus, daughter of former Navy Secretary Ray Mabus 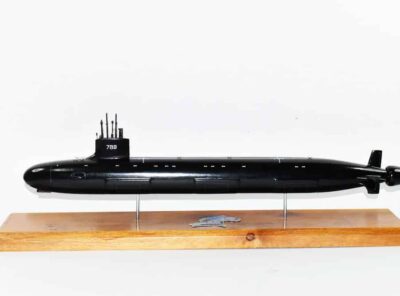