A hand crafted 14 inch plaque of the SSN-786 USS Illinois. Each plaque is carved from Mahogany and hand painted to provide a piece you’ll love!

USS Illinois (SSN-786) is a Virginia-class nuclear powered attack submarine in the United States Navy. Named for the State of Illinois, she is the third vessel to actively serve with the name, the previous two being battleships BB-7 and BB-65. She was built by the Electric Boat division of General Dynamics, the third of their Block III variants which feature a revised bow and technology from the converted sub-class of Ohio guided missile submarines (SSGN). The contract for the build was awarded on 22 December 2008 to Huntington Ingalls Industries in partnership with Electric Boat, and construction commenced with the keel laying ceremony on 2 June 2014, at their yard in Groton, Connecticut. First Lady Michelle Obama served as the ship’s sponsor,[8] and christened the boat on 10 October 2015. Illinois was launched on 8 August 2015 and completed sea trials on 2 August 2016.[9] She was delivered to the Navy on 27 August 2016 and commissioned in a ceremony at Naval Submarine Base New London on 29 October 2016. Michelle Obama, as the sponsor, attended the ceremony and is considered to be an honorary member of the crew due to her support of military families and her involvement with the Illinois crew and their families.

History
Illinois completed a change of homeport from Naval Submarine Base New London to Naval Base Pearl Harbor on 22 November 2017, where she is assigned to Submarine Squadron One

Ship’s crest
The official ship’s crest was designed by Christopher Durdle of Roseville, IL and accepted by the Navy at an unveiling ceremony at the Union League Club of Chicago on 2 April 2015. First Lady Michelle Obama congratulated the contest finalists and crew via video at the ceremony. 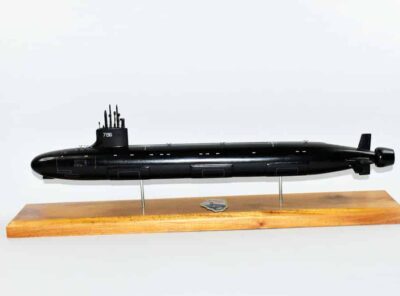