A hand-crafted 14-inch plaque of the SSN-779 USS New Mexico. Each plaque is carved from Mahogany and hand painted to provide a piece you’ll love!

USS New Mexico (SSN-779), a nuclear powered Virginia-class attack submarine, is the second ship of the United States Navy to be named for the 47th state. She is the second of the Virginia Block II submarines to enter service. From March–April 2014, she participated in the ICEX 1-14, becoming the second Virginia-class submarine to surface at the North Pole. The homeport of New Mexico is Groton, Connecticut at Naval Submarine Base New London.

The boat was launched on 18 January 2009 and was originally scheduled for delivery in August 2009.[1][10] The date of delivery was pushed back to November and the scheduled commissioning date was postponed to early 2010 after mechanical problems were found with her torpedo room weapons-handling system. New Mexico completed builder’s trials at the end of November 2009 and was delivered on 29 December 2009, four months ahead of the contract delivery date. She was commissioned on 27 March 2010.

Operational history
In February 2012, New Mexico rendezvoused with Royal Navy submarine HMS Astute (S119) underwater in the Atlantic Undersea Test and Evaluation Center, Bahamas, for a series of war games. Present aboard each submarine were the head of the Royal Navy, Admiral Sir Mark Stanhope and the head of the United States Navy, Admiral Jonathan W. Greenert in an historic underwater meeting between the leaders of both navies.

Ship’s crest
The crest of New Mexico was designed by Emilee Sena, a senior at St. Pius X High School in Albuquerque, New Mexico. Her winning design was chosen by the crew of New Mexico out of 180 submissions from schools throughout the state.

The design incorporates an image of a New Mexico sunset, representing the beauty that makes New Mexico the “Land of Enchantment”. The Sandia Mountains are shown at the time of the day when they demonstrate why they are called the Sandias–their pink shade. The red in the upper right corner represents the red in the US flag, symbolizing valor and the blood that has been sacrificed in battle. The blue in the lower left corner represents the blue of the American flag, symbolizing justice, vigilance, and perseverance. The Zia symbol represents the state flag, as well as the prominence of the sun in New Mexico. The shape of the emblem is unique because it reflects the influence of the Native American people in New Mexico, the shape is a design that can be commonly found in Native American art, such as blankets and pots.

The naval dolphins on the sides are symbols for naval submarines. They shine with a white color because they represent the white on the American flag. This color symbolizes purity and innocence. The submarine in the center represents what USS New Mexico is, a Virginia-class submarine. It has a bow wave in front of it because it is in motion. The people on top of the ship are naval officers, holding a flag. The bird along the hull is a roadrunner (Geococcyx), the state bird of New Mexico, known as a fast, agile, and fearless hunter. The gold in the border symbolizes courage, prosperity, wisdom, and confidence: perceived qualities for members of the Navy.

There is a nuclear symbol in the bottom left corner for two purposes, one to represent that the Virginia-class submarines are nuclear submarines and that a lot of nuclear development has taken place in New Mexico at Sandia National Laboratories (SNL) and Los Alamos National Laboratory (LANL), and so this honors the people that have, and will contribute to the growth of nuclear advancements. 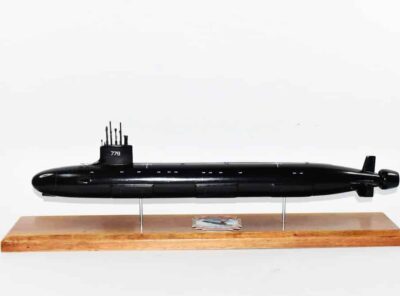