A hand crafted 14 inch plaque of the SSN-778 USS New Hampshire. Each plaque is carved from Mahogany and hand painted to provide a piece you’ll love!

USS New Hampshire (SSN-778), a Virginia-class nuclear-powered attack submarine, is the fourth vessel of the United States Navy to be named for the state of New Hampshire, although one of her predecessors, BB-70, was authorized but cancelled before keel laying. She is the first of the Virginia Block II submarines to enter service. Her name was awarded to the submarine after a letter-writing campaign by the third-graders from Garrison Elementary School and sixth graders from Dover Middle School in Dover to their members of Congress, the state governor, and the Secretary of the Navy

History
The contract to build her was awarded to the Electric Boat Division of General Dynamics Corporation in Groton, Connecticut, on 14 August 2003. Construction began in January 2004.[5] A keel-laying ceremony for the submarine was held at Electric Boat’s Quonset Point facility in North Kingstown, Rhode Island, on 30 April 2007.

The submarine was launched on 21 February 2008 and christened four months later, on 21 June 2008 in Groton, Connecticut, eight months ahead of schedule and $54 million under budget. New Hampshire finished sea trials and was delivered to the Navy on 28 August 2008. The boat was commissioned in a ceremony at the Portsmouth Naval Shipyard in Kittery, Maine, on 25 October 2008.

Equipment failure while on deployment
During the week of 13 March 2011, while on a mission under the Arctic ice cap, New Hampshire suffered an oxygen generator failure. This failure required the submarine to surface through the ice. The crew had used oxygen candles to make oxygen until the boat surfaced. United Technologies Corp., the company responsible for building the oxygen generator, had dispatched a representative with needed replacement parts to the submarine by way of a temporary ice camp, to assist the crew in repairing the problem. 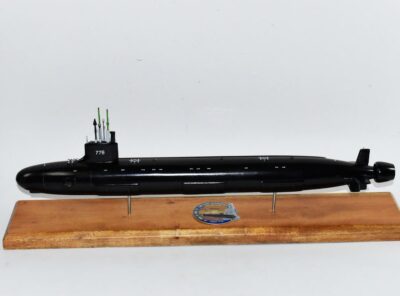