93 in stock (can be backordered)

Namesake
Whiting Field is named for Kenneth Whiting, who was commissioned from the United States Naval Academy on 25 February 1908. Whiting qualified in submarines, commanding USS Porpoise (SS-7), USS Shark (SS-8), USS Tarpon (SS-175), and USS Seal (SS-183). In 1914 he learned to fly under Orville Wright and was designated Naval Aviator number 16. He assumed command of the 1st Naval Air Unit in France following America’s entry into World War I and was subsequently assigned to command Naval Air Stations 14 and 15 at RNAS Killingholme, England. He was awarded the Navy Cross “for exceptionally meritorious service in a duty of great responsibility.” After the war he was partially responsible for the conversion of collier Jupiter into the Navy’s first aircraft carrier USS Langley (CV-1). He subsequently commanded Langley and USS Saratoga (CV-3), and various air squadrons prior to his retirement as Captain in June 1940.

South Field is utilized for United States Navy, Marine Corps, and Coast Guard students in the Advanced Helicopter pipeline, flying the TH-57 Sea Ranger. Upon completion of this syllabus students will become designated Naval Aviators and assigned to their respective Fleet Replacement Squadron.

Be the first to review “NAS Whiting Field Patch – Sew On” 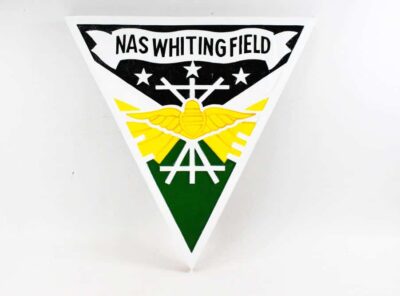 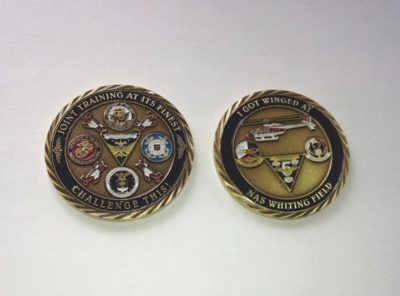 I got winged at Whiting Field Coin!

I got winged at Whiting Field Coin!