A hand-crafted 14 inch plaque of the NAS Oceana Plaque.

Naval Air Station Oceana or NAS Oceana (IATA: NTU, ICAO: KNTU, FAA LID: NTU) is a United States Navy Naval Air Station located in Virginia Beach, Virginia. The base is under the jurisdiction of Navy Region Mid-Atlantic and is the headquarters of Strike Fighter Wing Atlantic and Carrier Air Wings 1, 3, 7 and 8. As home to all east coast strike fighter jet squadrons, the Naval Air Station is classified as a master jet base. The airfield is known as Apollo Soucek Field, named after Lieutenant (later Admiral) Apollo Soucek, a Navy Test Pilot who set the global altitude record in 1930 by flying a Curtiss “Hawk” biplane to an altitude of 43,166 feet. Also home of the B58-HUSTLER and “BIG” Blackhawk.

Constructed in 1941, and officially commissioned in 1943, NAS Oceana has been home to carrier-based aircraft since its inception. The field serves as home for 14 deployable Strike Fighter squadrons operating the F/A-18E/F Super Hornet, a Strike Fighter Fleet Replacement Squadron, an adversary squadron, and a logistics squadron. Additionally, NAS Oceana operates Dam Neck Annex, a separate secured facility that is home to other non-flying commands, including NSWDG, and Naval Auxiliary Landing Field Fentress, a practice carrier landing field, in nearby Chesapeake, VA. The air station is not open to the public except one weekend each year, usually in September, when it hosts the Oceana Air Show.

History
In 1940, the U.S. Navy acquired the land that would eventually become Naval Air Station Oceana. At that time, the surrounding area was mainly farmland susceptible to flooding, but it served as a useful outlying field for the rapidly expanding Naval Air Force centered at NAS Norfolk and allowed units to work up for deployments away from the crowded base there. Airspace and airfield facility restrictions precluded NAS Norfolk from serving as the home station for tactical air units, and in the 1950s NAS Oceana was expanded to Master Jet Base-status to serve that purpose. NAS Oceana has grown to become one of the largest and most advanced air stations in the world, comprising 6,820 acres (including Dam Neck Annex). Obstruction clearances and flight easements total an additional 3,680 acres (14.9 km2). Its four runways, three measuring 8,000 feet (2,400 m) in length and one measuring 12,000 feet, are designed for high-performance aircraft. NAS Oceana’s primary mission is to train and deploy the Navy’s Atlantic Fleet strike fighter squadrons of F/A-18 Hornets and Super Hornets. Naval Aviators and Naval Flight Officers stationed at NAS Oceana fly approximately 219,000 training operations each year.

Under the Navy’s Master Jet Base concept, all Type/Model/Series (T/M/S) aircraft were homebased at one field with associated intermediate maintenance and training facilities. In the 1960s, NAS Oceana became the home to all East Coast based F-4 Phantom II squadrons. Fighter Squadron 101 (VF-101) established a detachment at NAS Oceana in its role as the Fleet Readiness Squadron (FRS), formerly known as the Replacement Air Group or “RAG”, that trained aircrews and maintainers to operate the Phantom (at the time, VF-101 operated out of NAS Key West, Florida). After the F-14 Tomcat arrived on the scene in 1976, VF-101 transitioned to Tomcat operations and Phantom training operations shifted to newly established Fighter Squadron 171 (VF-171) to handle Atlantic Fleet training for the F-4 Phantom until it was retired from service in 1984. The last F-14 was retired on 22 September 2006. At one time, in addition to fighter aircraft, all of the Atlantic Fleet’s A-6 Intruder medium attack squadrons were also home-based at NAS Oceana, along with VA-42 as the associated Fleet Readiness Squadron charged with training all east coast A-6 pilots, bombardier/navigators and A-6 maintenance personnel. The A-6E was retired from the Fleet in 1997.

VF-213 & VF-31 conduct a flyover of NAS Oceana after returning from the Tomcat’s final deployment.
Additionally, NAS Oceana became home to the F/A-18 Hornet in 1999 following the Navy’s closure of NAS Cecil Field, Florida as part of the Base Realignment and Closure (BRAC) process.

Aside from its military function, NAS Oceana was an alternative landing site for NASA’s Space Shuttle until the program ended in 2011.

On April 6, 2012 an F/A-18D assigned to VFA-106 took off from Naval Air Station Oceana, encountered dual engine failure and crashed into an apartment complex in Virginia Beach, Virginia. Both pilots ejected safely, and there were no fatalities.

Be the first to review “NAS Oceana Plaque” 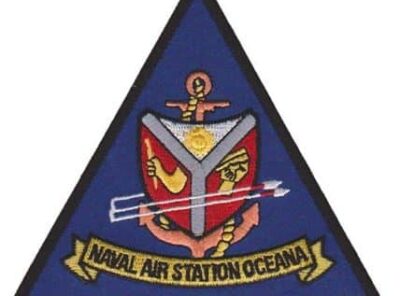