A hand crafted 14 inch plaque of the NAS Lakehurst Plaque.

Lakehurst Maxfield Field, formerly known as Naval Air Engineering Station Lakehurst (NAES Lakehurst), is the naval component of Joint Base McGuire–Dix–Lakehurst (JB MDL), a United States Air Force–managed joint base headquartered approximately 25 miles (40 km) east-southeast of Trenton in Manchester Township and Jackson Township in Ocean County, New Jersey, United States. It is primarily the home to Naval Air Warfare Center Aircraft Division Lakehurst, although the airfield supports several other flying and non-flying units as well. Its name is an amalgamation of its location and the last name of Commander Louis H. Maxfield, who lost his life when the R-38/USN ZR-2 airship crashed during flight on 24 August 1921 near Hull, England.[2]

When it was consolidated with McGuire Air Force Base and Fort Dix in October 2009, it became the naval component of JB MDL – a United States Air Force–controlled installation – and was placed under the 87th Air Base Wing. However, as with all joint bases, the installation receives support services from the previous installation authorities. Thus, Lakehurst Field is also provided certain services from Naval Support Activity Lakehurst (NSA Lakehurst), whose commander also serves as one of two Base Deputy Commanders.

The field was the site of the 1937 Hindenburg disaster.

Be the first to review “NAS Lakehurst Plaque” 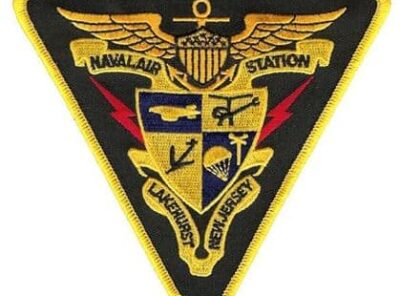