A hand crafted 14 inch plaque of the NAS Jacksonville Plaque.

Location
NAS Jacksonville is located in Duval County, Florida, within the city limits of Jacksonville. The base sits on a piece of land between the St. Johns River and Ortega River historically called Black Point. The airbase is part of the overall Jacksonville Naval Complex, a collection of Navy Bases in the Jacksonville Metropolitan Area that include Naval Station Mayport, the former Naval Air Station Cecil Field (now Cecil Airport), Naval Outlying Landing Field Whitehouse, and the Pinecastle Range Complex. It also neighbors a small ghost town called Yukon.

History
During World War I, the area now occupied by NAS Jacksonville, often referred to colloquially as “NAS Jax”, was named Camp Joseph E. Johnston, and was commissioned on October 15, 1917. The United States Army trained quartermasters and the center included more than 600 buildings; by 1918 Camp Johnston was the largest of all Quartermaster mobilization and training camps.[3] The second largest rifle range in the U.S. was constructed there, but the camp was decommissioned on May 16, 1919. The Florida National Guard began using the site in 1928 and it was renamed Camp J. Clifford R. Foster. In 1939 a group of 10 ex service men traveled to Washington at their own expense to talk the Navy, who was looking for a new base, to come and look at the old National Guard base, they did and liked what they saw. Most of their names are lost to history. Only two are known: Charles Bennett and Ira Lane.

Be the first to review “NAS Jacksonville Plaque” 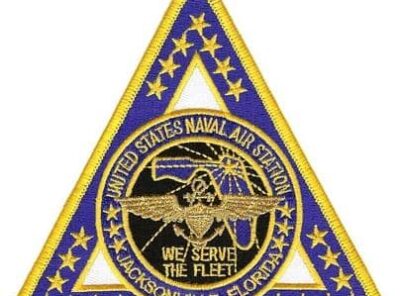