The airfield is named Van Voorhis Field in honor of Commander Bruce Van Voorhis (1908–1943) who was awarded a posthumous Medal of Honor.

History
The airfield at NAS Fallon was originally built in 1942 as part of a defensive network to repel a feared Japanese invasion of the west coast. It was soon taken over by the Navy for training use and has been used as such ever since with the exception of the period of 1946 to 1951, during which it was used by the Bureau of Indian Affairs. During the years prior to 1972, the base was known as Naval Auxiliary Air Station and was heavily used during the Vietnam War by various squadrons that rotated through the base before deploying to carriers headed for Vietnam. During these same years prior to 1972, many ground troops were temporarily assigned to NAAS Fallon for their hot weather training (during the summer months) and cold weather training (during the winter months). On 1 January 1972, the Navy recognized NAS Fallon’s importance to naval aviation by upgrading the base from auxiliary air station status to a major aviation command as a full-fledged naval air station. While NAS Fallon provides training for visiting carrier air wings, Strike Fighter Squadron 127 (VFA-127), the “Desert Bogeys”, was the air station’s only permanently based squadron from October 1987 until it was disestablished on 23 March 1996.

NFL – FAA airport diagram.gif
The Navy relocated its Navy Fighter Weapons School, or TOPGUN, from NAS Miramar to NAS Fallon in 1996, following the transfer of NAS Miramar to the Marine Corps and its redesignation as MCAS Miramar. This move resulted in the construction of a new ramp, hangars and academic buildings. The new command, the Naval Strike and Air Warfare Center (NSAWC), was established on 11 July 1996 and was a unification of TOPGUN, Strike University (Strike U), the Naval Strike Warfare Center, and TOPDOME, the Carrier Airborne Early Warning Weapons School. In addition to transferring the NSAWC squadron, a Navy Reserve adversary squadron, Fighter Squadron Composite THIRTEEN (VFC-13), the “Saints,” was also permanently relocated from its former base at NAS Miramar to NAS Fallon. As a result, VFC-13 replaced the disestablished VFA-127 in the fighter adversary role.

Associated bombing ranges checker the surrounding Lahontan Valley and Dixie Valley, which is the next valley to the east. Dixie Valley also contains a simulated air defense network, including approximately 20 operational radar installations. Many demilitarized armored vehicles, including some exotics, have been scattered throughout the area, presumably for ambiance. Most of this area is publicly accessible, with the exception of areas immediately surrounding the radar installations. The entire training area surrounding NAS Fallon is known as the Fallon Range Training Complex (FRTC).

Be the first to review “NAS Fallon Nevada Plaque” 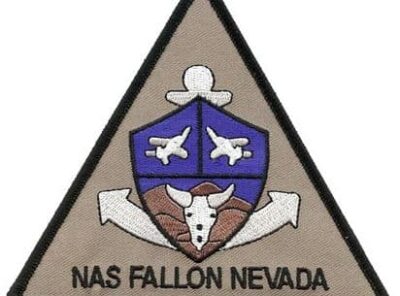