70 in stock (can be backordered)

Naval Air Station Fallon or NAS Fallon is the United States Navy’s premier air-to-air and air-to-ground training facility. It is located southeast of the city of Fallon in western Nevada. Since 1996, it has been home to the Naval Fighter Weapons School (TOPGUN) taking over from the former NAS Miramar, California, and the surrounding area contains 240,000 acres (97,000 ha) of bombing and electronic warfare ranges. It is also home to the Naval Aviation Warfighting Development Center (NAWDC), which includes TOPGUN, the Carrier Airborne Early Warning Weapons School (CAEWWS) and the Navy Rotary Wing Weapons School. Navy SEAL Combat Search and Rescue (CSAR) training also takes place there.

The airfield is named Van Voorhis Field in honor of Commander Bruce Van Voorhis (1908–1943) who was awarded a posthumous Medal of Honor.

Be the first to review “NAS Fallon Nevada Patch – Sew On” 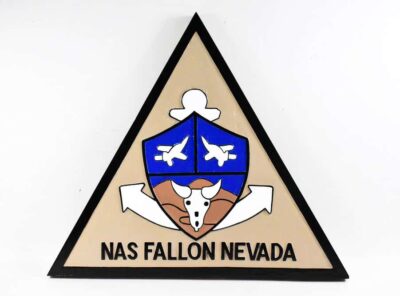