U.S. Naval Air Station Cubi Point was a United States Navy aerial facility located at the edge of Naval Base Subic Bay and abutting the Bataan Peninsula in the Philippines.

When the base closed, the air station became the Subic Bay International Airport and is still operating today.

Background
During the Korean War, Admiral Arthur W. Radford, Chief of Naval Operations saw the need for a naval air station at Cubi Point. It was a rugged and jungle-covered finger of land 3 miles (4.8 km) from Subic Naval Base. Radford believed the air station would be a vital link for the U.S. Navy in the Philippines.

In spite of the magnitude of the job and the tremendous difficulties the construction involved, the project was approved by The Pentagon. Civilian contractors were initially contracted to fulfill the project, but after seeing the forbidding Zambales Mountains and the maze of jungle at Cubi Point, they claimed it could not be done. The Navy’s Seabees were then given the project in 1951. The first Seabees to arrive were MCB-3 on October 2, 1951; the second, MCB-5, arrived on November 5, 1951; the third, MCB-2 arrived early in 1952. MCBs 9 and 11 followed later.

The first problem encountered was moving the fishing village of Banicain, which occupied a portion of the site for the new airfield. The town and its residents were moved to Olongapo, which became New Banicain. The former village of Banicain is now under 45 feet (14 m) of earth.

The next, and biggest, issue was cutting a mountain in half and moving soil to fill in Subic Bay and create a 10,000-foot-long (3,000 m) runway. The Seabees blasted coral to fill a section of Subic Bay, filled swampland, removed trees as large as 150 feet (46 m) tall and 6 to 8 feet (1.8 to 2.4 m) in diameter. It was one of the largest earthmoving projects in the world, equivalent to the construction of the Panama Canal. The construction project took five years and an estimated 20 million man-hours.

The $100-million facility (equivalent to $733 million in 2019) was commissioned on July 25, 1956 and comprised an air station and an adjacent pier that was capable of docking the Navy’s largest carriers. On December 21, 1972, Naval Air Station Cubi Point was renamed to honor Admiral Arthur W. Radford. Radford had the unusual honor of personally dedicating the facility. A plaque memorializing the occasion reads:

Dedicated in honor of Admiral Arthur W. Radford, whose foresight in founding U.S. Naval Air Station Cubi Point has enabled the United States Navy to provide invaluable support to the Seventh Fleet and to carry out its obligations under the Philippines-United States Mutual Defense Treaty.

An aerial view of Cubi Point
Eventually, NAS Cubi Point served as the primary maintenance, repair and supply center for the 400 carrier-based aircraft of the Seventh Fleet’s carrier force. During the Vietnam War, its jet engine shop turned out two jet engines per day to keep pace with demand.

On June 15, 1991, Mt. Pinatubo, only 20 miles (32 km) from Subic Bay, erupted and blanketed the facility in ash 1 foot (30 cm) deep. Dependents were evacuated and the Navy began an intense clean-up effort to return the station to normal operations. Within two weeks, they returned the station back to limited operations. Within four weeks, the Navy had restored almost all services to most of the family housing. By September, most dependents had returned to Subic Bay and Cubi Point, but in the same month the Senate of the Philippines voted to require the United States to withdraw from all of its facilities in the Philippines. The withdrawal was completed in November 1992 and shortly after NAS Cubi Point became Cubi Point International Airport, later renamed Subic Bay International Airport. Upon closure, the vast collection of squadron memorabilia displayed in the Cubi Point Officers’ Club was shipped to the National Museum of Naval Aviation at NAS Pensacola, Florida, and now forms the decor of the Cubi Bar Café, which opened in 1996 as the museum’s restaurant. 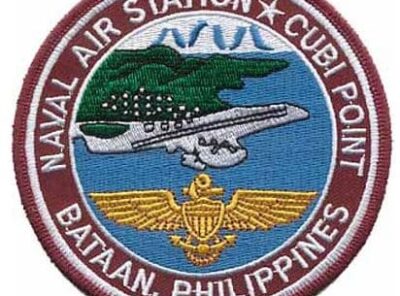